A SCOTS toddler was saved by a quick-thinking neighbour after she realised he was having a severe allergic reaction.

The three-year-old’s mother Amanda, 23, took her son home when the reaction started and was set to let him sleep it off when former Army nurse Anna, who had gone with the pair, realised his condition was much more serious. 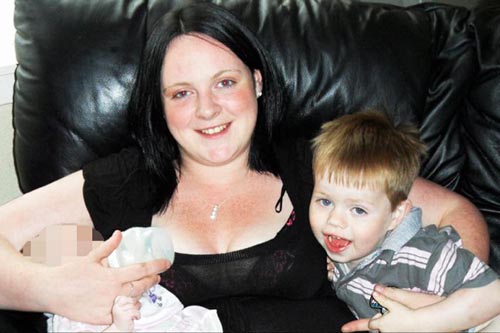 The 46-year-old’s medical training kicked in when the tot’s eyes, throat  and face swelled up and she swung into action, keeping him alive until paramedics arrived.

She administered first-aid on the unresponsive Parker while Amanda called for help.

Distraught Amanda feared she would lose her son as he continued to struggle for air, but Anna persisted with CPR until the ambulance arrived.

Amanda said: “If she had not come with me I would have let him sleep and he would have died.

“I was in such a state. Nothing I can do will ever make up for her saving my son’s life.”

Anna, who recently lost her mother, said: “Something just made me follow her through to her house. That little boy has a guardian angel somewhere.

“He was literally a couple of minutes away from death. He had changed within five minutes from an allergic reaction to anaphylaxis.

‘I followed Amanda because he didn’t look right. He had piriton which should immediately have taken effect.

Anna, who runs her own fabric design business from home, admitted she thought things were going to get desperate before the emergency services arrived and that she would have to resort to her basic army field medicine training in order to continue helping Parker

She said:“Just before the ambulance arrived I had started to turn him over to start mouth-to-mouth – he stopped breathing and it was a couple of quick puffs that he needed.

“At one point I thought I was going to lose him.”

Mum Amanda now plans to have her son checked for further allergies and praised Anna’s quick-thinking, saying she was “forever in her debt”.