THE OWNER of a tortoise who was found taking a stroll in Glasgow is being urged to come forward by the Scottish SPCA.

The animal welfare charity was called out to an address on Elder Street in Govan on Wednesday (23 May) after the male tortoise was spotted by a resident, meandering in the lane behind her house.

For the time being he is being kept safe at the Glasgow Animal Rescue and Rehoming Centre in Cardonald, where staff have given him the nickname Dylan. 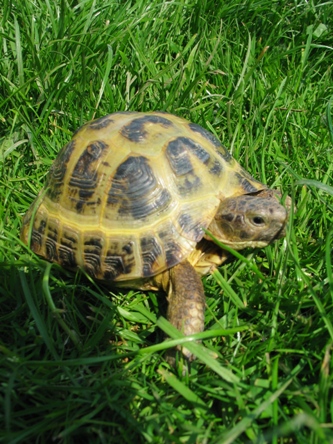 One animal rescue officer, Joanna Boyle has said: “Dylan was found on a warm sunny day so chances are he’d been enjoying the weather in his garden and decided to take a wander.

“Tortoises are great escape artists as they can fit through really small spaces and they’re a lot faster than people might think.

“Dylan is active, alert and in very good condition so we don’t think he had been straying for long.

“His shell was covered in mud when he was found so it certainly looked like he’d been on a little adventure.

“We’re sure someone must be missing Dylan so hopefully his owner will
come forward and we can return him home.”

Anyone who recognises this description of Dylan is being asked to come forward by calling the Scottish SPCA Animal Helpline on 03000 999 999 so that he can be returned to his rightful owner.