IN a drive to see an increase in visitor numbers to Scotland and to promote the country’s creative edge internationally, £1.2 million has been invested by Creative Scotland into thirty-two collaborative projects between the culture and tourism sectors.

During a visit to the Enchanted Forest in Pitlochry, Perthshire, the Creative Development Director for Creative Scotland announced his plans for upcoming projects which include having the respected visual artists Dalziel and Scullion introduce a new dimension to the sound and lights show at top visitor attraction.

He said: “The Year of Creative Scotland is a chance for us to celebrate and promote Scotland’s cultural and creative strengths at home and on a world stage.  These awards will enhance Scotland’s position as a tourist destination to national and international visitors alike and one of the world’s leading creative nations. 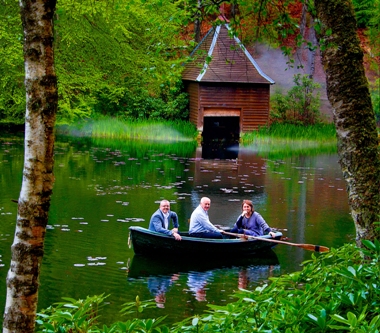 “We are thrilled to make this announcement in the company of renowned visual artists Dalziel + Scullion.  The Enchanted Forest already draws in great audiences, attracting over 26,000 visitors in 2011, their work will see even more visitors to this already magical event during 2012 the Year of Creative Scotland.”

The Scottish Government also unveiled proposals to bolster spending for cultural and creative activities and attractions.

“Through the Year of Creative Scotland, visitors and native Scots are being encouraged to see, experience and contribute to Scotland’s rich culture and heritage.

“The funding streams set up to support the year’s diverse range of cultural activity, are having a remarkable impact on our communities. Supported projects like the introduction of visual art to the Enchanted Forest, are helping to showcase, celebrate and promote Scotland’s cultural strengths on the world stage, to both international and local visitors.

“That is why I announced earlier this month that a further £2.2m would be available for the expansion of this important work – taking the total support for the Year of Creative Scotland to almost £8 million.”

Not only will visitors be able to enjoy new facilities funded by Creative Scotland at the Enchanted Forest but also in other locations up and down the country.

Those who head to Aberdeenshire will be able to take part in an annual crime writing event in Haddo House where as visitors to the Borders will be able to explore the recently discovered Hawick missile.

In Dundee, artist Jaygo Bloomn will create works of art around the city that audiences will be able to navigate in real time using their smartphones and in Glasgow, there will be a city-wide celebration of Charles Rennie Mackintosh.

Finally in Orkney, the international contemporary arts festival Papay Gyro Nights will further reinforce its successful artist exchange programme and a permanent artwork feature will be created in John O’Groats.

It is hoped that these new ventures will encourage visitors and Scots alike to experience something new and exciting.

Mike Cantlay, Chairman of Visit Scotland said: “One of the main strands behind the Year of Creative Scotland is to introduce new opportunities for visitors to see and experience Scotland’s vibrant culture across all regions. It’s fantastic to see so many great initiatives and festivals across the country benefitting from this funding boost, which we hope will attract even more visitors over the coming months.”