ONE of TV’s scariest monsters was inspired by a Scots comic. Dr Who writer Steven Moffat has revealed.

Moffat, 50,  said that the shape-shifting android, called the Teselecta, was inspired by The Numskulls from the Beezer comic.

In the DC Thomson comic a group of five miniature men inhabit the body of Edd Case and are responsible for controlling his actions. 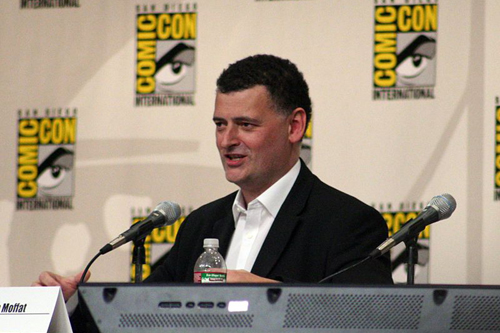 The Dr Who monster, which could take on any humanoid form,  was piloted by a crew of four hundred twenty-one miniature people.

The Paisley-born writer said: “There are some characters called the Numskulls in the Beezer that helped for some Dr Who monsters.

“They were the basis for the Teselecta in the Let’s Kill Hitler episode. It was just a memory I had of them from when I was a kid.

“I loved comics, especially the Beano my dad brought home every Thursday.”

But the hit-maker, who also writes for mystery show Sherlock, said he knows his success could come to an end.

He said: “I know I’m never going to have days like this again.

“Writing them both means working seven days a week, 52 weeks a year and still falling behind.

“But I can’t think of anyone who’s having a better time I am right now.”

He added that he’d had a tough time writing the exit script for Karen Gillan, who plays Dr Who assistant Amy Pond.

He said: “It was a very difficult script to write.

“It was emotional and in some ways I was relieved to get to the end.”

Steven is due to pick up a Special Award at tonight’s Baftas, but said he was nervous for the actors in his other hit show, Sherlock.

“It’d be terrible if I didn’t get the award for my own career, so I’ve got high hopes,” he joked.

“But Benedict Cumberbatch, Martin Freeman and Andrew Scott are all nominated for Sherlock so I have plenty to be nervous about.”