A DEVELOPMENT which includes Edinburgh’s first new Council homes for a generation has won a prestigious national housing award.

The Gracemount site was given the accolade in the ‘Best Partnership in Affordable Housing Delivery’ category of this year’s Homes for Scotland Awards.

The development, a partnership between the City of Edinburgh Council and The Cruden Group, is the first phase of the Council’s ambitious 21st Century Homes Programme which aims to build 1,400 homes for sale and rent.

Councillor Cammy Day, Vice Convener of Housing at the City of Edinburgh Council, said: “It’s great news that the first development in our exciting 21st Century Homes programme has been recognised by our peers in the housing industry.

“Judges said the entry was a clear winner. This is a clear endorsement of the public and private sector working together to deliver new housing developments including much needed affordable housing.  We hope this will be seen as best practice for others to follow.”

On behalf of the Cruden Group, Steven Simpson, Managing Director of Cruden Homes (East) Ltd, said: “We are delighted to have won this prestigious award. It is testament to the hard working and enthusiastic staff of both The Cruden Group and City of Edinburgh Council who have collaborated closely over the last two years to ensure this project is a success in terms of housing regeneration. The development is an example of what the public and private sector can achieve when it works together.”

This is the second major award that the Council and The Cruden Group have won for their development in Gracemount – last year it won ‘Community Partnership of the Year’ in the Scottish Homes Award.

The first phase consisting of 99 new homes, (67 for social rent, 20 for mid-market rent and 12 shared equity) should be completed by this summer. The second phase will consist of 70 flats and 46 houses.

So far 52 homes have been completed in the opening phase with the first tenants receiving the keys to the new Council home in February this year. 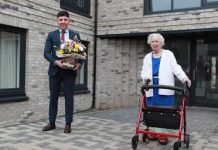