HUNDREDS of visitors to Edinburgh Zoo had to seek shelter today after a family of hogs escaped from keepers and ran amok.

One of the fleeing hogs – from a family of two adults and two piglets – even managed to reach the enclosure belonging to the zoo’s normal star attraction, the Giant Pandas. 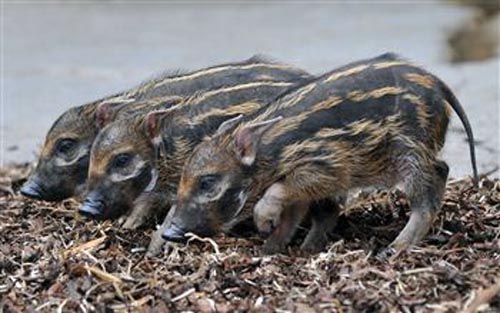 After a drama lasting more than an hour, the two hot and angry 200lb adult hogs were shot with tranquiliser darts and captured unharmed.

The unprecedented scenes unfolded as zoo staff tried to transfer the animals – dad Hamish, mum Belle, and daughters Winnie and Wilma – to a private collection.

One of the adults managed to break through a barrier and the rest of the clan followed suit.

Darren McGarry, Head of Animals at Edinburgh Zoo, said: “Four red river hogs, two adults and two youngsters, made a dash for it early this morning.

“Select areas of the park were closed, with visitors being moved into internal areas where necessary.”

“All of the pigs remained on park grounds, three in the vicinity of their enclosure, with one travelling down to the panda enclosure.  We suspect she wanted to see what all the fuss was about before she moved off to her new home.”

“Our keeping staff are highly training for eventualities like this, and handled the incident quickly and efficiently, recapturing the animals in a short period of time.”

According to one witness, part of the training for recapturing hogs appears to involve chasing them with brushes.

Raymond Richmond, 46, who was enjoying a day out with partner Debbie Morgan, 49, said: “We were heading to the monkey house and the staff came running up and said: ‘We’ve got to escort you to a safe area’.

“We were in the monkey house for an hour.”

Stephen McDairmid, 39, was visiting the zoo on a day out from Perth.

He said: “One of the hogs came running down the road and we had to be shepherded into the monkey house until it was safe.

“There was a couple of keepers chasing them with brooms in their hands and they shepherded them into the nearest bit away from people.

“We hid in the monkey house for half an hour, then they moved us to reception. But it hadn’t spoiled our day.” 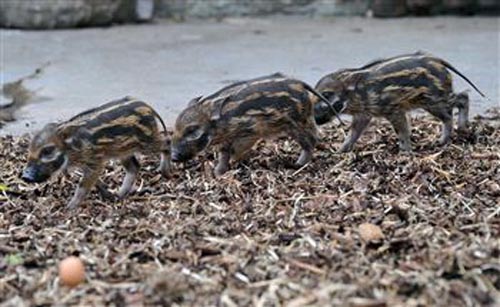 Friends Debbie Noel and Janice Macdonald hid in the Zoo cafe while the pigs were on the loose.

Debbie said: “ We saw the keepers running about and we saw them coming with a tranquilliser gun and a crate.

“The cafe staff kept us informed, we were told one of them went to the pandas.

“They said they had been moved enclosure and they must have been trying to get back to their old one.”

Janice added: “The man at the Grasslands cafe said he’d gone to take the bin out and one of them ran at the cafe window.” 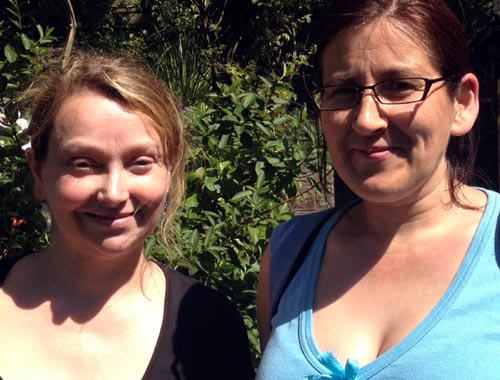 Another zoo goer, who did not want to be named, said she and her two granddaughters were kept outside while the animals ran loose.

She said: “We had to wait to get in. We were waiting for about half an hour and missed our appointed time for seeing the pandas.”

She wrote: “At Edinburgh zoo hiding in the monkey house as something has escaped! #notjoking!”

She was later moved to the gift shop until the animals were caught. 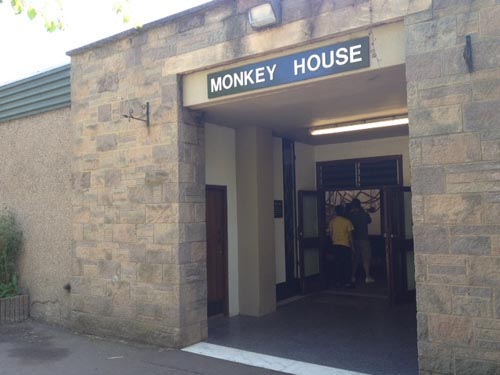 Visitors were forced to flee the hogs in the Monkey House

She said: “Twitter has just informed me my parents have been locked in a monkey enclosure at Edinburgh zoo this morning.”

The first hog to arrive at the zoo, named Belle, came from Germany in 2004, followed by a boar called Hamish in 2006.

The hogs are native to the rainforests, mountains, and scrublands of West and Central Africa and are mostly nocturnal.

The zoo hit headlines in 2010 for “culling” two Red River Hog piglets due to “surplus” population of the hogs.