A PUPPY with two broken legs has been cruelly dumped in a park in Fife.

The five month old collie-cross was reportedly found abandoned in a box on parkland in Methil.

The Scottish SPCA were called in after local residents sheltered the animal at their nearby home. 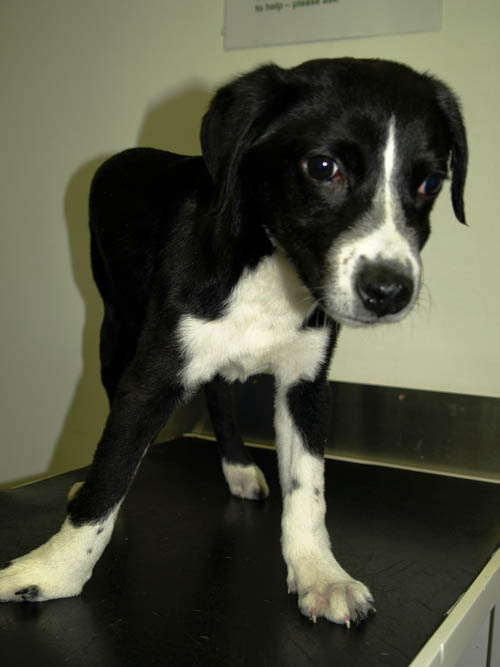 Cody was unable to walk due to his injuries

The residents said they had found the pup in a cardboard box on open ground between Methil Brae and Ossian Crescent at around 11.30pm on Sunday evening.

The little black and white pup had suffered two fractures, one to his left rear leg and another to his right fore leg, which had left him in pain and unable to walk.

Senior Inspector Steven Gray collected the puppy and took him to a local vet where he is currently receiving treatment and care. He has been named Cody.

SI Gray said, “Cody has suffered trauma to two of his legs, one is so severe that it may require amputation.

“I’ve no doubt this wee pup was suffering from a great deal of discomfort and stress when I collected him on Monday as he was completely immobile and had a very high temperature.

“Despite this, he is a surprisingly resilient little guy who has given no cries and appears to be quietly enduring his injuries.

“Cody is a lovely-natured young dog so we can’t understand why anyone would abandon him while suffering from not one but two leg breaks. It’s also inexcusable that his owner did not take him straight to a vet for treatment for his injuries.