WHEN they walk on to the pitch they are met with cries of mockery- “they’ve got girls on their team!”

But their opponents’ laughter soon turns to dismay, as the Fernieside Colts Under-14 squad have won match after match to top their league this year.

The team took on four girls last year, when they languished second last in the league. 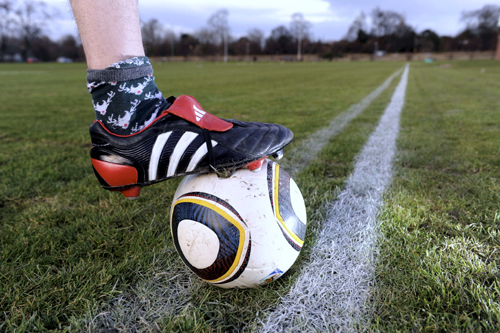 Now they are at the top of the table of the Lothian Buses South East Region’s under 14s league and and are set to play in the cup final tomorrow  night.

The Fernieside Colts are the only team in their league to have female players.

Tracey Jefferies, whose daughter Kirsty has been in the squad since last season, said: “Other boys joined this season as well as the four girls and they have all just gelled together.

“It’s not all down to the girls, but they have played their part. It’s been a fantastic performance.

“There has been a mixed reaction to the girls from other teams, but Fernieside have welcomed them with open arms.

“The boys have been absolutely brilliant and don’t look at the girls as anything other than football players.

“They are on the park on merit so there’s a mutual respect.

“It’s fantastic for the club to achieve this, particularly for a team that were going along every week and didn’t win very often.

The Fernieside Colts finished the league six points ahead of rivals.

They will now face off against Spartans in the cup final at the opposing team’s home ground.

Though the team’s goalkeeper, Kirsty Jefferies, will be out of action with a broken collarbone.

Though she is a Jambo, her husband Zander, who coaches the Colts, is delighted with her success in Hibs and and the Fernieside team.

She said: “They get some mixed responses. Some teams say ‘haha, they’ve got girls in their team!’ when they’re walking out.”

“But then it’s ‘Go get the girls!’ when they start playing.

“There’s some wounded pride and some lessons learned.”

The team have one year after this before they will have to play in separate categories for each gender.

She continued: “Because we did so badly last year, we couldn’t get a team together this season.

“To keep the team afloat, we pulled girls in and it has turned the team around. We are playing some really good football.”

Mrs Russell said the team felt positive going into the cup final, but were not

She said: “They’re confident but not over-confident.”

The team is coached by Zander Russell and Graham Sibley.

Earlier this year half of the players in the Hibs girls under-13 squad were told they couldn’t compete in the finals of the Tesco Cup, a national tournament.

Though they had played in all the qualifying matches, the fact the finals were being held in Birmingham meant the five 11-year-olds in the team could not play.

The English football authorities insisted all players had to be 12 to compete in the finals.