In one experiment at Dundee University into human obesity, rats were drip-fed lard for weeks and then forced to swim before having their brains dissected.

An MSP responded to the claims by calling today for an independent enquiry into the university’s animal testing policy. 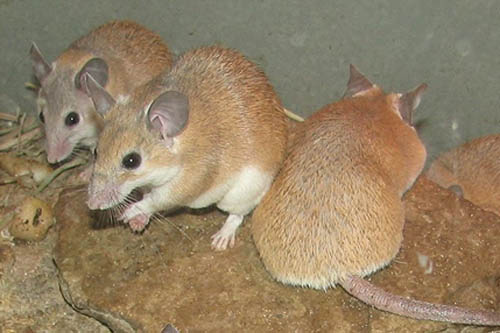 It recently emerged that Dundee University carried out 47,000 experiments on animals in 2011.

The British Union for the Abolition of Vivisection (BUAV) investigated the experiments and highlighted five cases which involved significant suffering to animals without the point of saving human lives.

The purpose of the experiments – all of them approved by the Home Office – was to investigate the effects of stress, obesity, painkillers and nicotine on the human body.

In one case mice were injected with painkillers and then had their tails immersed in water at 48 degrees centigrade to measure how long it took them to withdraw in pain.

The animals were also placed on a glass plate and an infrared laser was shone onto the back of their paws to see how quickly they pulled away.

Experiments in to the human skin condition psoriasis involved feeding mice a disease-inducing agent or rubbing it in to their skin. Skin samples were shaved off throughout the study for analysis and the mice were observed and scored based on the severity of hair loss and redness and scaling of the skin.

The mice had visibly red, dry and sore cracked skin with severe hair loss on their backs, necks, legs and paws. They were killed after 22 days and their tissues were dissected.

In order to investigate the effect of age and nicotine on the brain, both young and old rats had nicotine surgically pumped into their bodies for 13 days before the rats were killed and their brains dissected.

To investigate the effect stress has on the brain, rats were placed on an open, raised platform and left for an hour every day for up to 20 days. They were then killed 24 hours after the last stress exposure to have their brains dissected.

An experiment to examine whether obesity has an effect on humans’ ability to learn involved feeding rats a diet high in lard for 12 weeks.

They were then placed in a large pool of water and forced to swim until they found a small platform hidden under the surface.

BUAV Scientific Advisor Dr Katy Taylor said: “The experiments uncovered by the BUAV show that even under the UK licence system, researchers at the University of Dundee are allowed to cause significant suffering to animals for non-life threatening human conditions.”

She added: “It is misleading to tell the public that the research is only carried out for serious human health problems like cancer when, in reality, animals have been used in experiments for conditions such as stress, skin infections, nicotine addiction and the effects of obesity on learning.

“We are not convinced that all efforts to avoid using animals have been made.”

The tissue was surgically implanted under the skin of mice. Four days later, the mice were subjected to four hours of radiation and then killed to harvest the xenografted breast tissue.

He said: “The question that arises is who should decide if there are no alternatives available.

“I would have thought there needs to be some independent third party assessment of this and it should not be left entirely to the body carrying out the experiments.”

Green MSP Patrick Harvie, said: “Medical research that results in better treatment is a very positive thing for our society.

“But I’d like to see full transparency from research institutions and increased government funding into alternatives to animal testing.

“BUAV has a vital role in scrutinising and challenging the research industry on best practice.”

A spokesman for the University of Dundee insisted animals were used for research only in instances where no alternatives are available.

He added: “The results of these studies are of great importance in better understanding and developing treatments for serious health problems including Alzheimer’s, Parkinson’s disease, cancer, heart disease, diabetes, genetic disorders and infectious diseases.

“The University takes its ethical and legal responsibilities very seriously.

”Alternatives to the use of living animals, such as computer models and increasingly sophisticated cell culture systems, are adopted whenever possible, but procedures that involve animals continue to be necessary in many cases, particularly when the integrated behaviour of complex physiological systems is being studied.

“An analysis of whether these potential benefits to human and, indeed, animal health can be seen to outweigh the welfare costs experienced by experimental animals is conducted independently by a Home Office inspector as part of their assessment of each project licence application. Work cannot start until a Home Office licence has been formally issued.

”Compliance with the provisions of the law is monitored closely by the university and, indeed, by the Home Office inspector, who makes regular and unannounced visits.”