A SIGNED Beatles concert programme from their 1963 tour of Scotland is expected to fetch up to £6,000 when it goes under the hammer next month.

The programme belongs to a mystery female fan from Kirkcaldy who met the Fab Four backstage after winning a national newspaper competition to meet John, Paul, Ringo and George.

The female fan, who has asked not to be named, got all four Beatles to sign her concert programme backstage at the town’s Carlton theatre in October 1963. 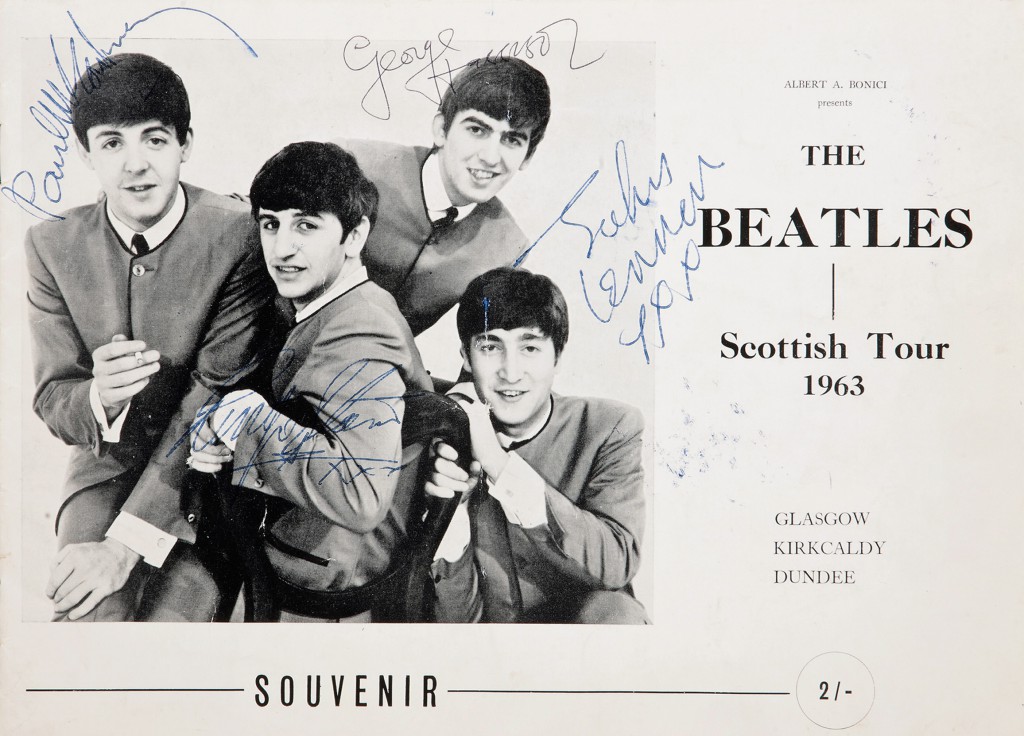 Nearly 50 years later, the autographed programme, which cost the fan a mere two shilling, will go up for sale at the prestigious Christie’s South Kensington auction house in London on Tuesday June 12.

Beatles memorabilia collectors are expected to shell out between £4,000 and £6,000 for the prized relic.

Nearly half a century old, the concert programme is emblazoned with the words: “The Beatles, Scottish Tour 1963, Glasgow, Kircaldy, Dundee”

The Beatles performed two sell-out shows in Kirkcaldy on the second day of a three date Scottish mini tour promoted by Albert Bonici, each of which was watched by 1,500 screaming fans.

The other acts on the bill were Mike Berry and Freddy Starr and the Midnighters.

The concerts were originally to have taken place at the Raith Ballroom in Kirkcaldy but due to a decision by manager Brian Epstein that The Beatles would only perform in theatres, the booking was moved to the larger Carlton Theatre.

This was The Beatles’ only visit to Kirkcaldy. The Carlton, which stood on Park Road, opened in 1937, and was later used as a bingo hall. It was demolished after a fire in 1972.

John Lennon is said to have named the imaginary “Duchess of Kirkcaldy” from the Beatles Song ‘Cry, Baby Cry’ after the wife of the concert organiser.

He was rumoured to have visited Fife on several occasions to stay with the woman, whose name is not known.

Local rumour has it that the manager of rival venue The Kinema Ballroom, Cecil R Hunter, turned down the Beatles’ original booking enquiry to play there because his wife did not like the look of them.

One week after playing Kirkcaldy, The Beatles appeared on ‘Sunday Night At The London Palladium’ and Beatlemania was born.