DISNEY has been forced to redraw a map of Scotland which showed the border with England in completely the wrong place.

But the giant entertainment corporation’s new map seems to be declaring Scottish independence two years before the referendum.

The map was produced as part of an online video to promote the firm’s Scottish tour, which ties in with the release this summer of their Highland blockbuster Brave. 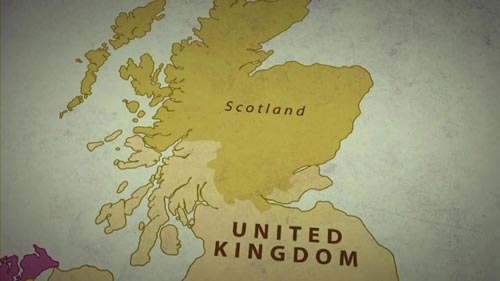 The map appeared to show the Scottish border 100 miles north of where it should be.

The original version the map appeared to show the border between 100 and 150 miles north of where it should be.

In the east, Edinburgh and Fife were shown south of the border. In the west, the border appeared to extend as far north as Fort William, even including Ben Nevis.

After the confusion was pointed out, Disney produced a new version of the video which avoids the problem altogether by doing away with the border.

But the map is labelled with “Scotland” in north and, further south, “United Kingdom”, appearing to suggest that Alex Salmond has already achieved his lifelong political dream.

The original map has been heavily criticised online by dozens of disgruntled Scots.

One, Scott Thomson, wrote on one site: “At no point in history has that ever been the border.”

Referring to the ongoing confusion over names, he added: “This is a ridiculous map. The United Kingdom has never existed without the inclusion of Scotland, and if it’s supposed to be before the Union, which looking at the trailers I presume it is, then the country south of Scotland is England!

“Why is this so difficult for some people?”

Elaine S wrote: “Grrrrrr! As a Fifer I am not amused that we’ve have been left oot of Scotland!

“It’s a map of Scotland in the future when King Alex is on the throne.”

The Disney video – made to promote their Adventures by Disney tours – has received more than 14,000 hits on YouTube.

It describes the coach tours as an “epic journey across Scotland following in the footsteps of the filmmakers of the new Disney Pixar movie Brave”.

People taking the tour will get the opportunity to ride a Highland pony and canoe on Loch Ness.

Disney will give Brave its European premiere at the Edinburgh Film Festival this month.

60+ Educational Titles for Kids to Watch on Disney Plus

University graduate thanks Dundee for allowing him to achieve his dream