One thousand schoolchildren learn to ‘playsafe’

A THOUSAND primary one school children from 21 schools across Edinburgh are learning how to keep themselves safe during a four-day personal safety event in the city.

‘Playsafe 2012’ is a partnership initiative taking place at the Drumbrae Leisure Centre on June 4 and again between June 6 and 8, involving Lothian and Borders Police, British Transport Police, Lothian and Borders Fire and Rescue, the Royal National Lifeboat Institute, the Scottish Ambulance Service, and the City of Edinburgh Council.

Now in its seventh year, the programme aims to teach children throughout the West and Almond Neighbourhood Partner Areas how to keep themselves safe in various situations. 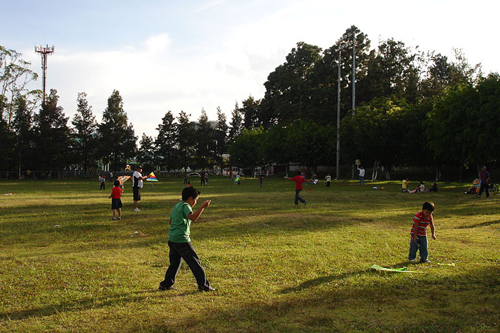 The scheme will help the children learn to stay safe

The event is a combination of structured inputs and practical scenarios designed to help the visiting children learn by experiencing different realistic situations involving the emergency services.

Lothian and Borders Police will be running through scenarios on ‘Keeping Myself Safe’, as well as bringing the police motorbikes along.

British Transport Police will be bringing along a section of a real railway sleeper to educate kids on the dangers of playing on railway tracks, as well as showing an educational DVD.

As part of the Service’s Child Safety Campaign, firefighters from Lothian and Borders Fire and Rescue Service will be taking the children through the Service’s key safety messages for the summer, such as the dangers of playing with matches and fire and around open water.

Staff from the Council’s West Neighbourhood Team will be on hand alongside officers from the services involved to run the event.

Superintendent David Carradice, West of Edinburgh Commander, said “Initiatives like Playsafe are invaluable in teaching our young people how to keep themselves safe.

“With the school holidays coming up, this is a fantastic opportunity to not only educate children about the potential dangers of various situations, but also how to avoid getting themselves into harm in the first place.

“We are extremely grateful to the Drumbrae Leisure Centre for hosting the event, as well as BAA, who provided us with snacks and drinks for the children and provided funding for buses to allow pupils from all over the West of Edinburgh to attend.”