A DAREDEVIL granny plummeted 12,000 feet from a plane to celebrate the Queen’s Diamond Jubilee.

She said: “When we first went up, I was a little apprehensive, but there was a lot riding on me doing it and I couldn’t back out. 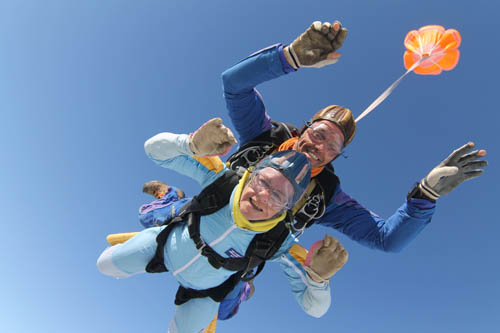 Daphne did the jump to celebrate the Jubilee  Photo:Simon Hughes, AirAffair

“There was a lot of cloud and, when it was time to jump,  it was like diving into icy cold water. But once we broke through the cloud, it was absolutely fantastic – so smooth. It was everything I had hoped it would be and more. The landing was perfect, too!”

For now, Daphne will be putting her feet up for a well-deserved rest, but she’s already thinking about how to celebrate her 95th birthday – and  is contemplating the idea of a wing-walk.

“I would certainly do sky-diving again,” added Daphne, whose daughter-in-law Tracy Strathern also jumped on the same day.

While the Queen celebrated her special day on Monday, June 4 with a star-studded concert at Buckingham Palace and the nation hit the streets for parties, Daphne took to the skies to raise money for the Alzheimer’s Society in memory of her late beloved husband, Vic.

Daphne, lives in Eastborne, still goes to the gym three times a week.

She had planned to do the jump on her 90th birthday in May, but it had to be postponed due to bad weather.

Daphne puts her health and being in great shape down to her love of fitness, and has plenty of advice for fellow seniors looking to keep active. While the Queen, who is four years younger than Daphne, attributes her fitness to countryside walks, Daphne prefers the gym and playing badminton with the ‘Golden Oldies’, a group of long time friends who socialise and meet regularly to exercise at David Lloyd Leisure gym in Eastbourne.