GORDON Ramsay has turned on “stupid” Twitter followers who made fun of a blind contestant on his TV show.

Ramsay, who is currently presenting MasterChef on American TV, branded one fan “ignorant” after he received a string of negative comments about the inclusion of a disabled contender in the programme.

The Scottish Chef, originally from Renfrewshire, defended blind entrant Christine Ha, (33), after she was awarded a Masterchef apron and made it through to the second round of the TV contest. 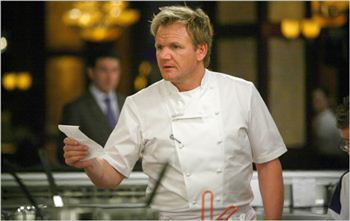 Ha, who prepared a dish of Vietnamese catfish and pickled vegetables on the show, cooked by herself but was provided with an aide to help her find items from the store cupboard

After Masterchef aired in America this week, one user wrote: “Of course they gave a blind woman an apron. They (FOX) will do ANYTHING to attract viewers.”

Another joked: “How dare you put a blind woman into Master Chef! ‘Oh I’m sorry I didn’t mean to burn you with hot oil. Sorry I wasn’t looking,’ calling the tweeter “ignorant”.

Ramsay – who uses the Twitter handel @gordonramsay01 – replied to the tweeters: “You’re sick get some help! Unbelievable she cooked an amazing dish!”

The furious 45-year-old also ranted: “How stupid of you to be so ignorant.”

The TV chef then re-tweeted a message of support to his 850,000 followers which read: “As a blind instructor, thank you for having the guts to have a visual impaired cook on.”

She suffers from neuromyelitis optica (NMO), an autoimmune disorder that affects the optic nerves and spinal chord. She lost sight in one eye in 1999 and was completely blind by 2007.

Ramsay, who is currently embroiled in a family feud with his father-in-law, appeared to outrage an entire nation in 2009 when he described Australian journalist Tracy Grimshaw as an “ugly old pig”.

Following the row former Australian Prime Minister Kevin Rudd slammed the TV chef, saying: “All I could describe his remarks as reflecting is a new form of low life.”