The wife of a Scots sailor missing in Dubai said her husband wants to be found.

Leading Seaman Timothy Andrew MacColl, 27, known as Timmy, was a member of the crew of HMS Westminster, which arrived in Dubai on May 26 before setting sail again last Thursday.

His family said the married father of two, whose wife is expecting their third child in October, was last seen by a shipmate getting into a taxi alone at about 2am on May 27. 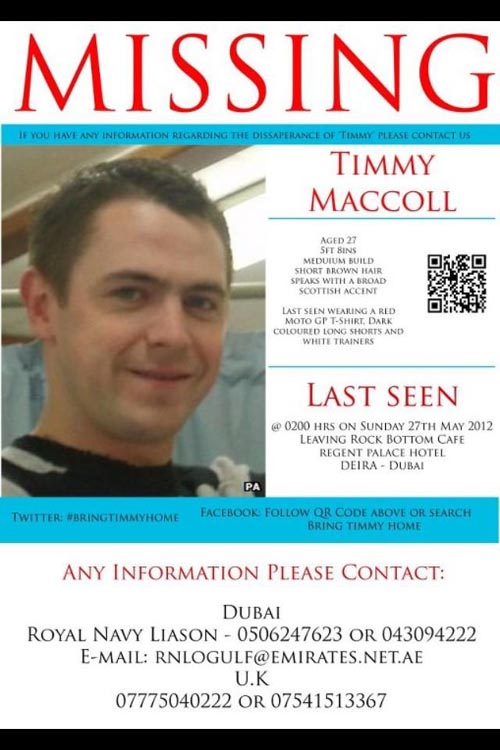 Timmy was in Dubai when he went missing.

He is said to have just left the Rock Bottom Bar at the Regent Hotel in the area of Deira, about a 15-minute drive from Port Rashid, where HMS Westminster was docked.

Leading Seaman MacColl, of Gosport in Hampshire, and originally from Killin, in Stirlingshire, has two children aged six and four.

His wife Rachael said the last time she spoke to him he had arranged their next internet video chat.

She said: “He was really excited as we were going to Skype call the next day.

“He was moaning at me not to be late because I can sometimes take a while to get the computer up and running. He confirmed it with me at 2pm he would Skype, and that call never came.”

She added: “I wouldn’t say he’s disappeared. He’s missing, my husband wants to be found.”

More than 50,000 Facebook users have joined a group to raise awareness of Leading Seaman MacColl.

His wife said crew members from the ship walked the route he had taken and spoke to members of the public to gather information.

He is described as white, 5ft 8in, of medium build, with short brown hair cropped with a flicked fringe.

He speaks with a broad Scottish accent and was wearing a red Moto GP T-shirt, dark-coloured shorts and white trainers.