THE daughter of a cancer victim who died during his wedding ceremony today told mourners at his funeral: “My dad was the best dad in the world.”

Katelyn Chandler, 8, in a note read out to dozens of friends and family who gathered to say goodbye to her father Iain, added: “He was always there for us and we will always love him. Sleep tight dad.”

Iain, 39, passed away before he was able to say “I do”, meaning he died without marrying his partner and mother of his children Kerryanne McMurray. 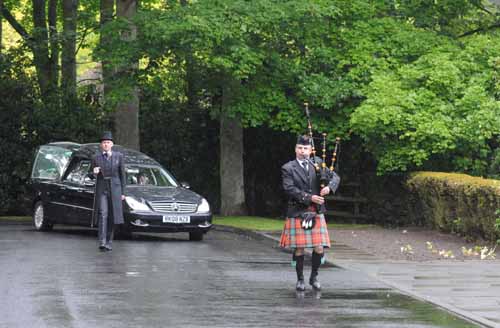 The piper played Amazing Grace as the hearse arrived

The rain fell heavily as the plain light wood coffin was brought to the crematorium in Kirkcaldy, Fife, this afternoon as Kerryanne – Iain’s partner of 10 years – said goodbye.

The hearse was filled with plain white and pale yellow flowers arranged in the shape of a heart and the word “dad”. 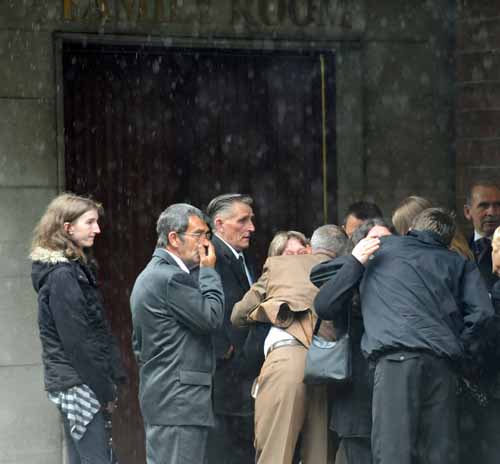 A piper played Amazing Grace as the vehicle drew up to the doors and Whitney Houston’s I will always love you played as the mourners filed into the chapel.

Iain’s brother Keith led the tributes to the taxi driver from nearby Lochgelly who was diagnosed with bone cancer in February.

He said: “I felt it a great privilege to be with him at the end. Tragically, before he could get married, Iain passed away peacefully in Lochgelly on the 26 of May with his friends and family around him.” 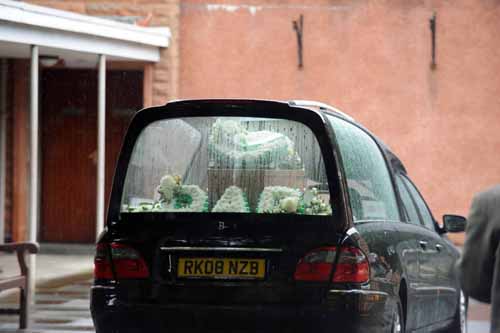 The white and pale yellow flowers spelled out “Dad”

“In the week before he died we took him on a day out to Eyemouth, a little village in Berwickshire that we used to go as children for family holidays. The children and Iain had a great time.

“Iain was loving father to his two children and a devoted partner to Kerryanne and was fond of all his relatives and friends.

“He was kind and would do anything for anyone, particularly his mum and dad, whether it was trips to the shops or jobs around the house.” 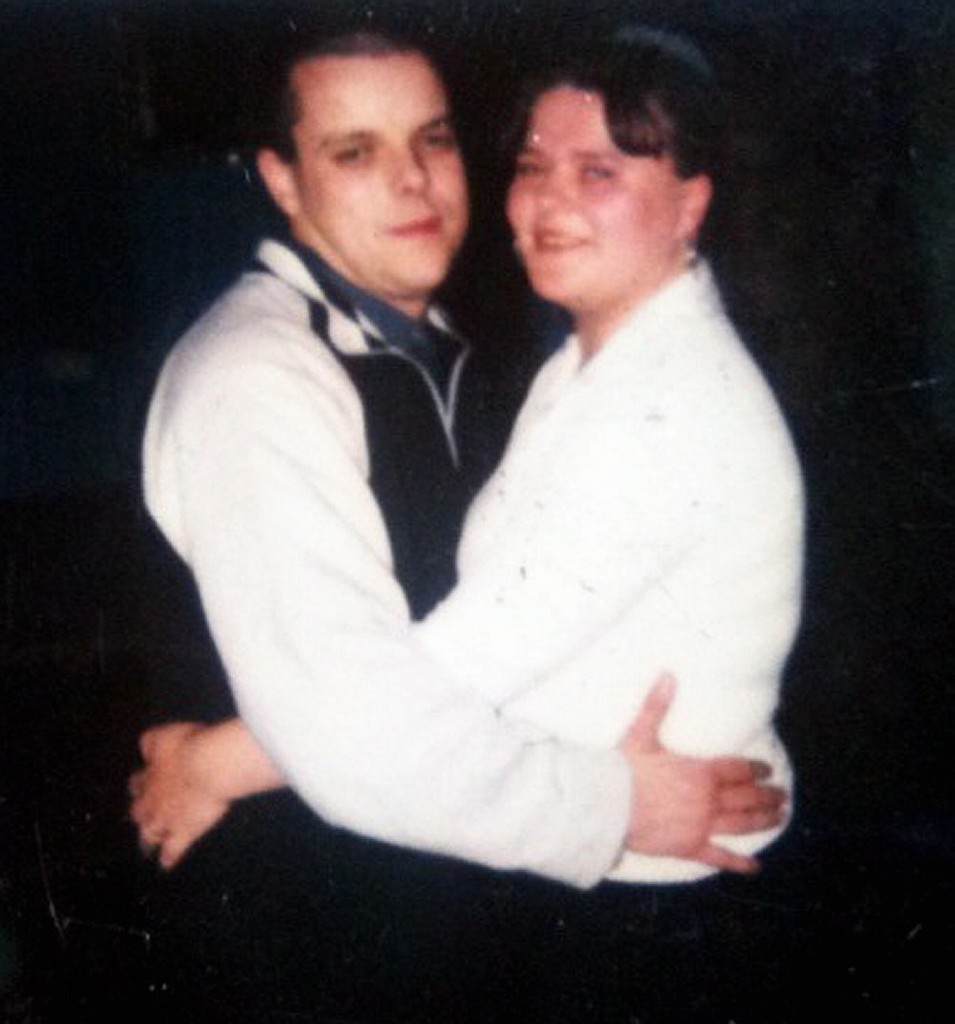 Iain died before being able to say “I do”

He added: “It was with great sadness that we learnt of Iain’s terminal illness earlier this year. His cancer mystified even the cancer experts in Edinburgh and in the week before he died he asked the doctor again if he’d finally managed to confirm the exact type of cancer and they couldn’t.

“Iain treated the disease with the stoicism which we knew him for.

“He rarely complained and seemed to accept all the treatments gratefully. 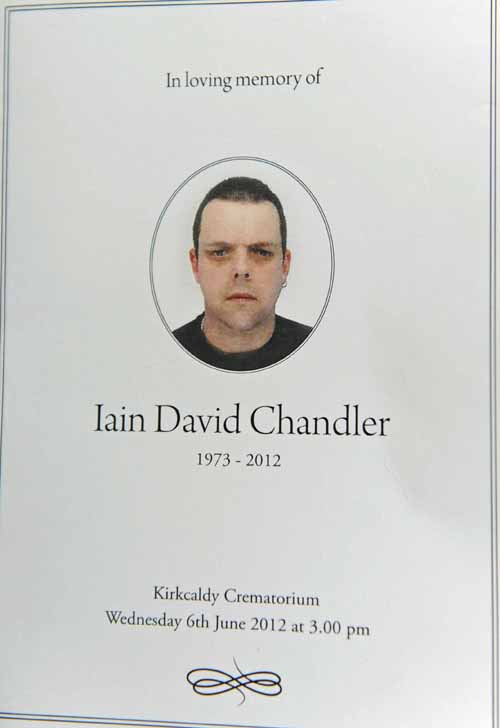 Mourners said goodbye to the father-of-two in Kirkcaldy

“The doctors in Edinburgh said he really enjoyed visiting the Western General once a week for his chemotherapy because he got a trip out on the bus and a nice dinner to boot.”

Rev Stenhouse, of St Serf’s Parish Church, Lochgelly, told the congregation: “We are all gathered here because of one very special person, Iain Chandler.

“We join here today on a very difficult day for Iain died at an age where he still had so much life to live an so many things he still wanted to do and so many people who loved and needed him, especially his children Katelyn and Scott and his partner Kerryanne.

“His dying has been a shock to all of us.” 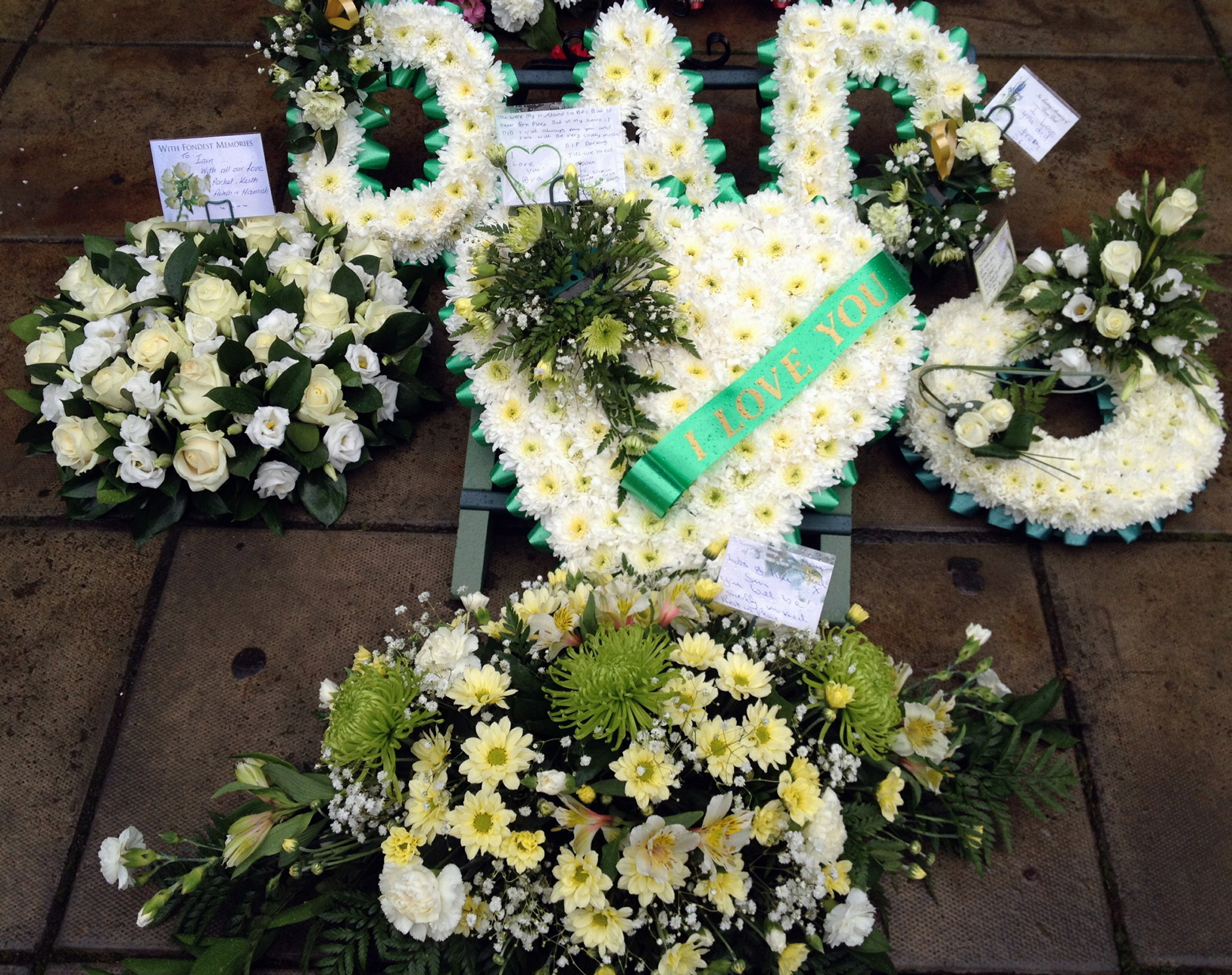 Floral tributes from his family arorned the ground outside

She added: “I didn’t know Iain very well. I met him towards the end of his life.

“Kerryanne tells me that Iain was a happy person, always laughing and joking and kidding about things.

“Iain was happiest with all his family around him. He was greatly loved by them all and he will be greatly missed.”

As the curtain drew across the coffin, Kerryanne could be heard sobbing loudly. 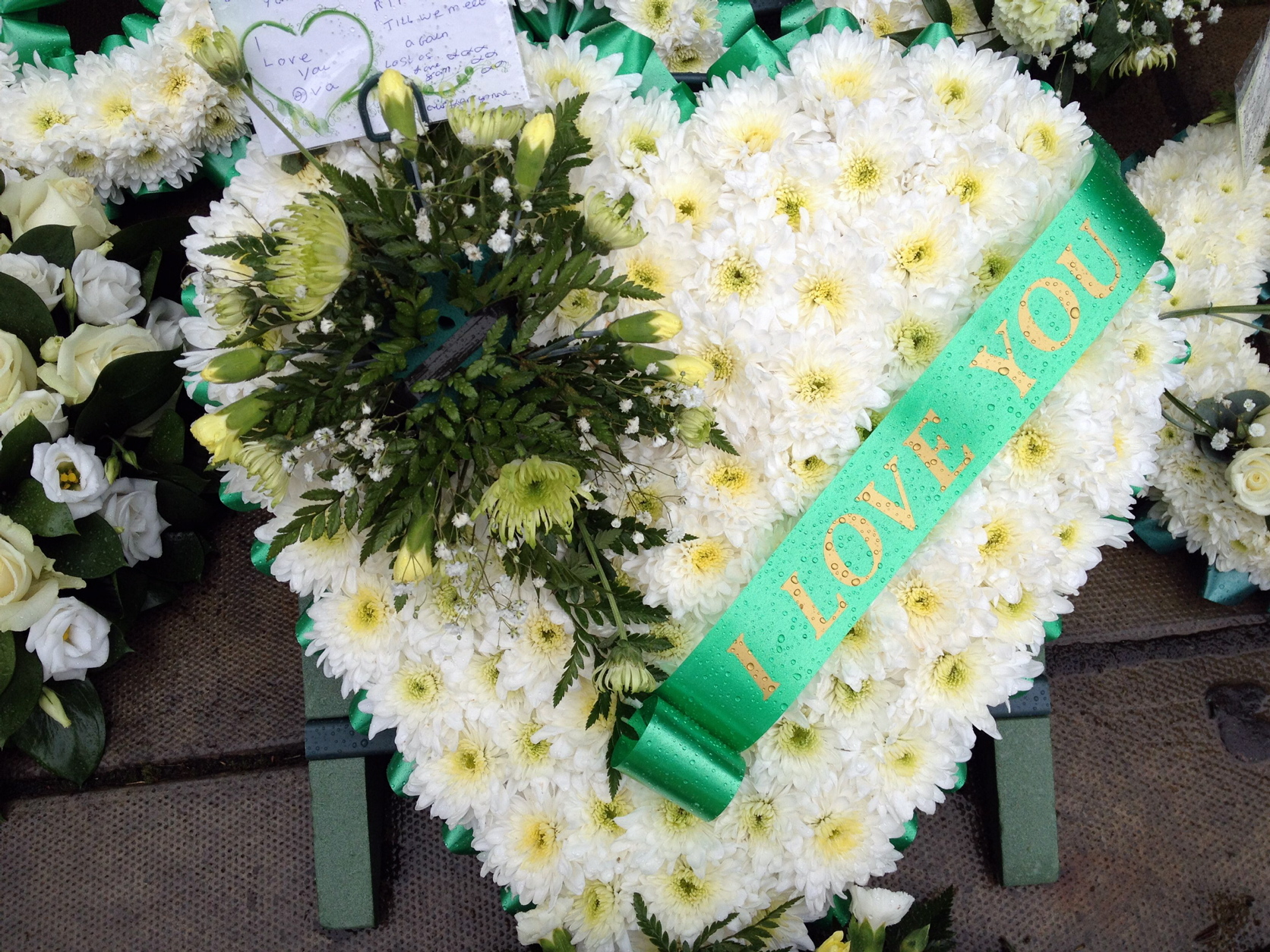 Kerryanne’s tribute was in the shape of a heart

Later she emerged looking pale and solemn while clutching a bunch of pale pink roses.

Her relatives placed Scott, 3, who was wearing black trousers and a red tartan waistcoat, and Katelyn, who was dressed in a white frock, into a waiting car.

Iain had planned to marry Kerryanne at his local community club in Lochgelly on Saturday evening.

On the morning of the ceremony Iain was so ill it was decided he should be transferred to Victoria Hospital, Kirkcaldy, where the ceremony would be carried out. 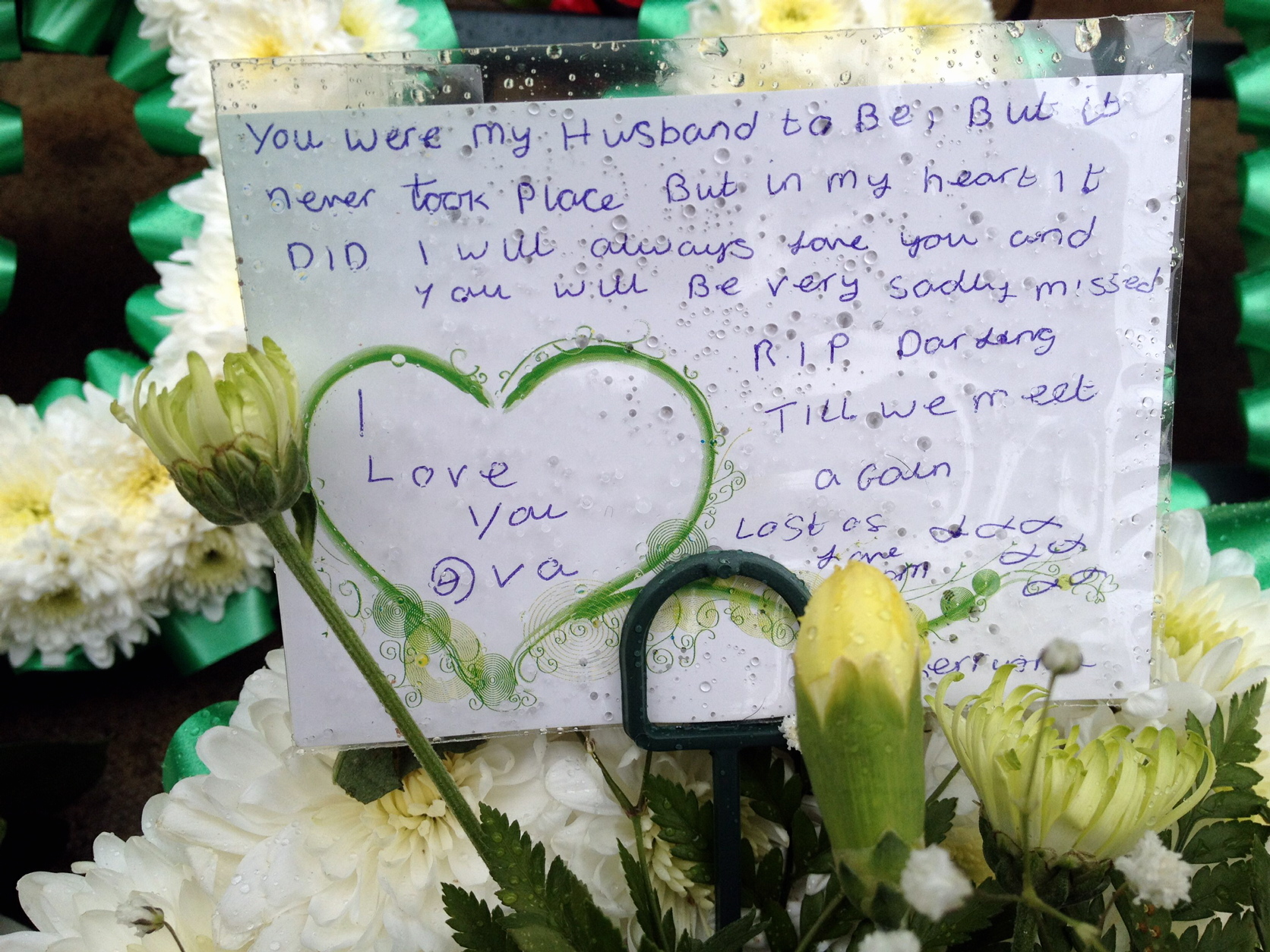 Her message said she had married Iain in her heart

The couple rushed home where close family members watched as they exchanged rings, but Iain passed away before being able to say “I do,” – meaning the marriage was not legal.

Kerryanne also left an emotional tribute to her fiancé on Facebook last week, writing: “R.I.P Baby lost of love from Kerryanne and Katelyn and Scott we will always love you.”