COMPULSORY wearing of bike helmets should be abandoned, a leading cycling group has claimed.

The Edinburgh-based charity, which has been promoting cycling for 20 years, believes helmet-wearing riders are at greater risk because motorists consider them “safer”. 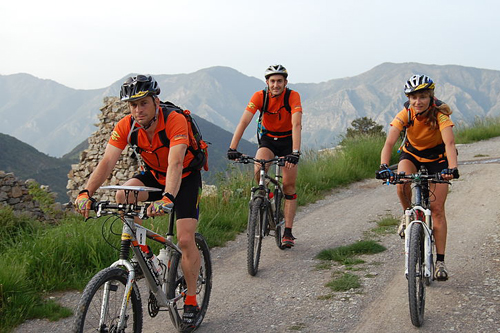 Spokes says it will not back events wher helmets are compulsary

Spokes revealed its dramatic and controversial change of view in an online newsletter, saying: “Compulsion, or one-sided promotion, is very wrong – even more so as they put people off the healthy choice of getting about by bike.

“Therefore Spokes will not publicise charity rides or other events involving helmet compulsion.

“We call on all other organisations concerned with public health to do the same.”

Trossachs Ton and Tour de Forth are believed to be among the events Spokes will no longer promote.

The charity is also urging police forces and official bodies such as Cycling Scotland to stop using publicity images with only helmeted cyclists.

It also wants the manufacturers to publicise the risks as well as the benefits of their safety gear.

Spokes added: “Helmet manufacturers and sales outlets, in the interest of public safety, should have to make clear on boxes and in sales literature a helmet’s impact design speed (usually around 12mph) and the potential risks as well as the benefits.”

The group maintain that while in some cases wearing a crash helmet may be beneficial – such as if an object hits the user straight on the head – they can cause more harm than good as they “worsen some serious head injuries if hit at an angle making the neck rotate too fast or far.”

It is also claimed that bike users who adorn themselves in safety equipment can feel over-confident and behave in a cocky manner on the road.

The Royal Society for the Prevention of Accidents supports Spokes.

ROSPA campaigns manager Michael Corley said: “We do not believe it is practical to make the use of cycle helmets mandatory.”

Malcolm Wardlaw from the Transport and Health Study Group said: “Helmet laws have not noticeably reduced serious head injuries, except by reducing cycling.

“An excessive focus on helmets adds ‘fear’ to the obstacles hindering a cycle revival.”

Ellen Booth, Brake’s senior campaigns officer said: “We encourage cyclists to do everything they can to reduce risks, including wearing a helmet and high-visibility gear, and choosing the safest routes possible.”

Brenda Mitchell, lead solicitor for Cycle Law Scotland agrees that helmets on cyclists are an important and necessary commodity.

She said: “For me it’s simple, if you can protect yourself from risk of serious head injury then do so.

“I fell off my bike two years ago and sustained a head injury that could have been avoided if I’d been wearing a helmet.

“We share road space with motorised vehicles and that itself puts a cyclist at risk.”

Spokes’ stance on cycle helmets follows the announcement that £180,000 has been spent improving urban cycling environments across the country in order to tackle the problem of road accidents involving cyclists.