A STRAY tortoise has been found roaming in woodland in Dumfries and Galloway.

A member of the public spotted the male tortoise while walking in Colvend Woods near Dalbeattie on Tuesday and handed him in to nearby boarding kennels. Staff at the kennels then contacted the Scottish SPCA for help.

Nicknamed Gonzales, the tortoise is now being cared for at Dunragit Kennels near Stranraer. 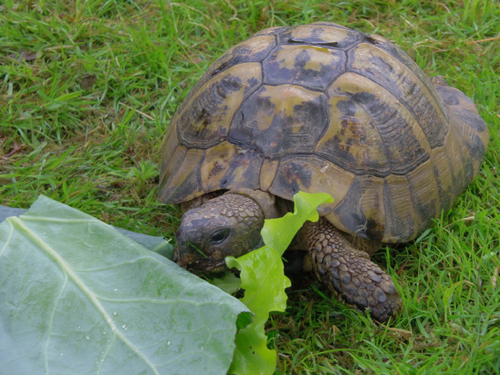 Animal Rescue Officer Tracy Cannon said, “This is the second tortoise I’ve rescued in as many weeks which is quite unusual.

“We can only assume that the short burst of hot weather we had recently has resulted in them escaping from their owners gardens.

“We don’t expect Gonzales to have travelled too far from home, so it may be that his owner resides in the nearby village of Colvend and if so, we’d urge them to come forward to reclaim their missing pet.”

Only last week the Scottish SPCA appealed to find the owner of Whizz, a tortoise found crossing a busy road near Annan. Thanks to the local press coverage, not one but two people came forward to claim Whizz, or Zippy as she is actually known, who had been missing from her original home since September 2011.

Zippy was found wandering by Ms Nicola Lewis from Landheads, Nicola gave the stray tortoise a home and renamed her Ernie, but Nicola is happy for Zippy to be returned to her original owner.

Mr Alistair Freeman, of Milnefield, was delighted to be reunited with his lost tortoise who is now back home with her best pal and fellow torty, Buttons.

Anyone who recognises Gonzales should call the Scottish SPCA Animal Helpline on 03000 999 999 and ask to be connected to Dunragit Kennels.