SWEET-toothed Scots are being offered the ultimate ice cream challenge – eating a 3,000-calorie sundae in less than 15 minutes. 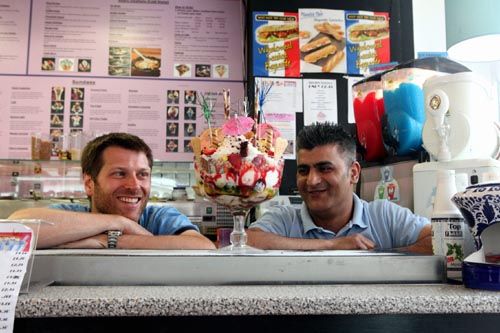 Tahar, who runs an ice cream shop in Edinburgh, charges £10 for the Titanic but promises to give the dish away free to anyone who finishes it within quarter of an hour.

But the promotion could backfire on Tahar after one customer guzzled the Titanic within the time limit just days after it started on Friday.

Tahar said: “We thought it could be our very own Man v Food challenge for our customers to take part in.

“It’s something a bit different and fun for people to try.

“We get a lot of customers coming in to the shop that like to eat the 12 scoop sundae so we thought we would take it to the next level.

“It really is a bit of fun and everyone that has taken part so far has really enjoyed it.

“To enter you just come along to the parlor and fill out a form and pay one pound which goes to charity and if they manage to eat the sundae they get it for free and if they fail it will cost ten pounds.”

“And we’ve created the wall of fame and shame where we put people’s picture after they’ve attempted it,” he added. 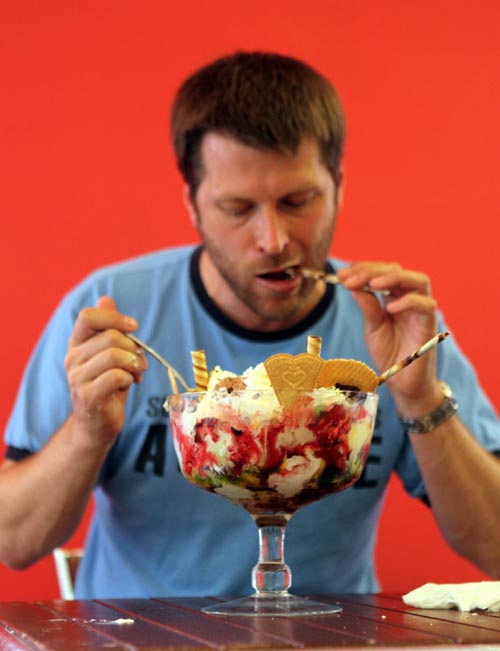 Alan begins to feast on the ice cream 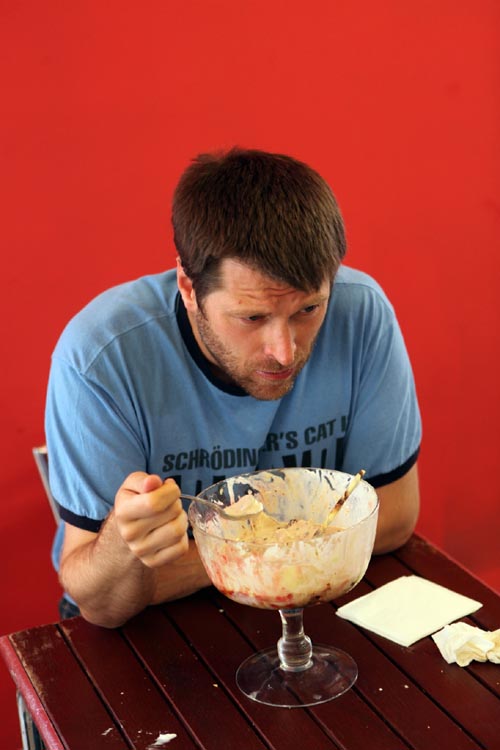 But begins to struggle towards the end 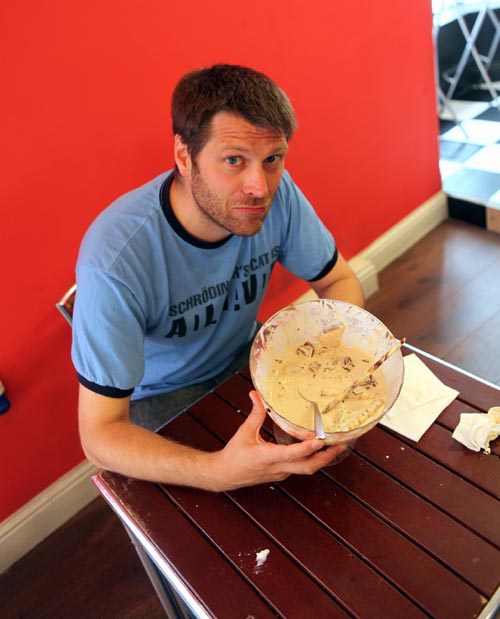 And fails to complete the challenge

The only rules are that everything must be eaten from the bowl. And anyone who finishes the dish but  is then sick will be disqualified.

Since the challenge started on Friday only one person has successfully completed it.

Regular Alistair Jones somehow downed the sundae in an impressive 10 minutes and 6 seconds.

Another man who was brave enough to take on the task was Alan Miller.

The 37 year-old from Merchiston, Edinburgh, said: “I’m a massive fan of Man v Food and I was walking past with my daughter and I see the sign so I thought I would give it a shot.

”I thought that slow and steady would be better than eating it really fast.”

Alan blamed his defeat on smarties and fudge sauce.

“It was hard going – it was the smarties, they were really crunchy and the fudge was difficult to eat because it was so cold and chewy.”

But not everyone approves of the Titanic.

Sonya Tierney, of healthy eating organisation Edinburgh Community Foods, warned: “Eating so much ice-cream and everything else that is in it would include a massive volume of sugar and fat which is obviously bad for you

“And there is the massive calorie intake as well. And eating so much ice-cream in such as small space of time can lead to extreme head aches.

“In America people that make a career out of eating massive meals are seriously damaging their health and eventually they will put weight on.”

But she added: “If someone is in generally quite good health then the body should burn off the calories in the sundae in about a week.

“I would advise against doing it regularly but I think that a one off attempt would do no real harm.”

From munching his way through an 11lb pizza and tackling a 72 oz steak Richman has tried some monster meals. And he has admitted to gain up to 50 lbs while shooting the show.