ONE of Robert Louis Stevenson’s finest tales is being released as a new play for children.

Treasure Island: A Play by Lynn Brittney has been produced by students at Edinburgh Napier university and illustrated by Scottish school children.

The play, which includes a foreword by Michael Russell MSP, uses excerpts from Stevenson’s original text which was first published in 1883. 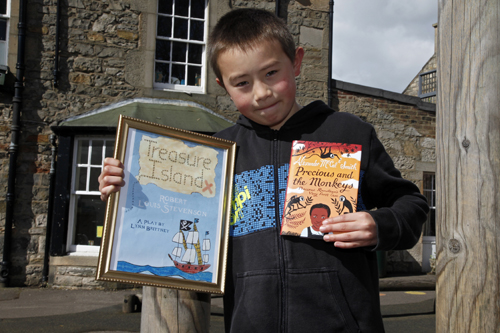 Ben Lewis designed the cover for the new book

Widely recognised as one of Scotland’s most prized literary treasures, the Edinburgh born author has delighted generations with the pirate tale which introduced the world to the cunning, peg-legged Long John Silver.

In this latest edition, which is officially launched today the classic story has been re-worked for classroom drama sessions.

Stockbridge Primary’s Ben Lewis, who is in P5, beat off more than three-hundred other primary school youngsters in a competition to see his hand-drawn, pirate-ship design sail on to the new book’s front cover.

Avril Gray Programme Leader for Postgraduate Publishing at Edinburgh Napier said: “This much-loved story will reach new readers through this innovative book. Peppered with Stevenson’s original prose, the playscript also has sea-shanties, a pirate glossary and fun facts. Mixing the old and the new adds a new dimension to this classic. The book’s creation was a real adventure for our MSc Publishing students and they have produced a book that is worth its weight in gold.”

All the profits from the play are to be donated to the charity Children’s Hospice Association Scotland (CHAS) who provide hospice services for children and young people with life-shortening conditions.

Waterstone’s in George Street have already placed a firm order.

CHAS Fundraiser Amy Telford said: “We’re thrilled to be benefitting from the new book. It’s a favourite story at our hospices where the children and young people love getting dressed up and trying out their best pirate phrases. We need to raise over £7 million every year to run our care services across Scotland and all the money raised will help the families that we support across Scotland.”