SCOTLAND’S other national drink has been branded the worst substance for staining carpets.

Irn Bru has proved harder to clean up than lipstick, red wine and even permanent marker.

The sweet orange beverage lived up to its infamous “made from girders” slogan by coming top of a list of hard-to-shift stains on household carpets. 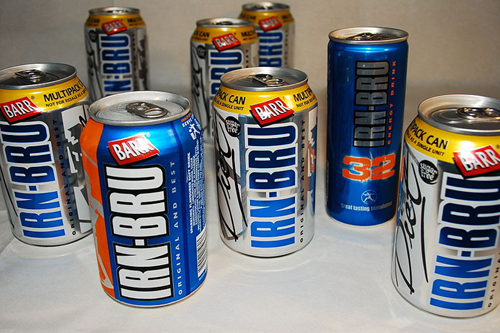 It’s believed the colorants which give the drink its distinctive hue are to blame for its stubbornness.

The stains are so hard to clean some textile cleaning firms use it as a benchmark to test new recruits.

Ian McCormack, a stain removal expert with ServiceMaster Clean, said: “Irn Bru is not only the most popular soft drink in Scotland but it is also the hardest to clean up.

“”We found that Irn Bru is really difficult to remove, perhaps adding weight  to the makers’ claims that it is made from girders. It is really tough.”

The top secret recipe is known to include at least 32 flavours, including caffine and sugar, but the exact make up of the drink is known to just three people, including former AG Barr chairman Robin Barr and his daughter, Julie, who works as the company’s secretary.

It’s the first time the drink, invented in 1901, has been put to the test alongside obstinate stains. 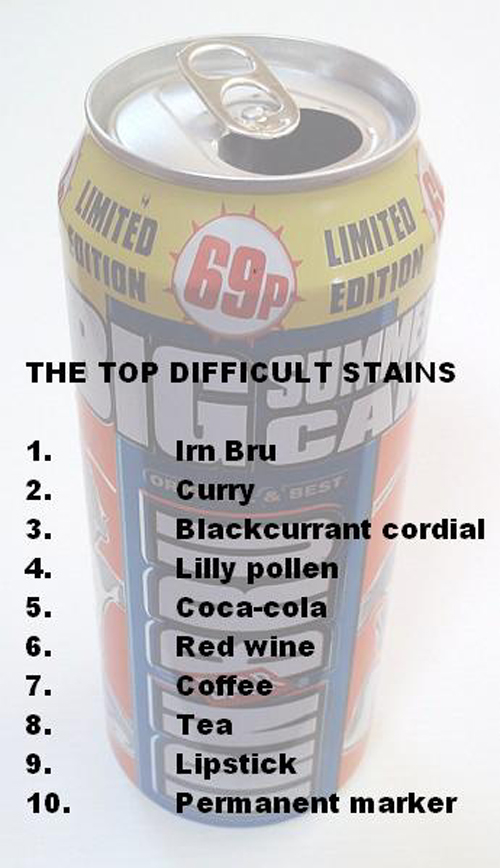 Stanley Friend, 46, who has worked for ServiceMaster Clean for 19 years, blamed the colouring for the drink’s unyielding stain qualities.

“It’s more or less the colourants that make it so difficult to remove,” he said.

“It just goes straight into the carpet and you can’t get it budged, but we’ll probably never know for sure because of the secret recipe. You just wonder what it does to your insides.”

He said that the drink had become a favourite substance for homeowners looking to defraud insurance companies, after improvements in cleaning methods for gloss paint.

He said: “I’ve been to a few houses where I’ve been thrown out because I could get Irn Bru stains out. They weren’t normal claims, shall we say, but fraudulent, and clients have not been happy when they weren’t able to get a new carpet.

“One woman had around ten Irn Bru stains around her home, and by the time  she made me a cup of tea, I had three of them out. She was none too happy, and she physically lifted me out of the house. She was a big lady.”

The distinctive look of the drink came under threat from EU law last year after the European Commission proposed radical cuts in the amount of Sunset Yellow (E110) colouring, which alongside Ponceau 4R (E124) is a key ingredient in the drink.

However they eventually settled on a limit of 20mg, the same amount used in Irn Bru.

A spokeswoman for Irn Bru said: “Irn Bru fans will be glad to hear that if they have a mishap in the home with their favourite soft drink then both our own consumer care department and ServiceMaster can help them with advice on how to get their carpet clean.”