A FAMILY has been devastated after two sisters were diagnosed with cancer just months apart.

Rebekah Rae, 12 was diagnosed with bone cancer Ewing’s sarcoma in September, and with the tumour removed her family had hoped their ordeal would be over.

But just last week doctors found her younger sister Megan had B Cell Lymphoma, after her family noticed a lump behind her ear. 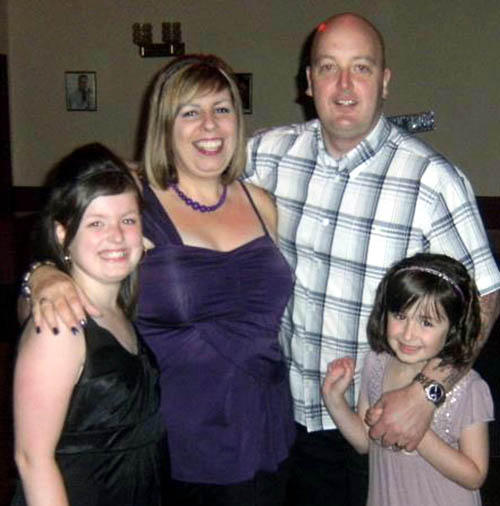 Rebekah, left and Megan, right, alongside their parents Julie and Murray.

As Rebekah finished her treatments, Megan will be starting chemotherapy.

Doctors told parents Julie and Murray, from Kirckaldy in Fife, they had more chance of winning the lottery twice than two diagnoses like this.

The two types of cancer are completely different.

The girls’ aunt Marie Lally said: “Megan’s diagnosis came as a shock to everyone.

“She had a lump on her neck, but doctors originally thought it was a swollen gland. Unfortunately it wasn’t.

“The doctors at the Sick Kids hospital told my sister and Murray this is the first time in over 15 years they have had a case of two siblings having cancer.

“They also said the chance of this happening was like winning the lottery, one in so many millions.”

Marie is now raising money for the family, as Julie has been off work for almost a year and will no longer receive pay.

She said: “Unfortunately as from August Julie will get no money from her work as she will have been off for a year and Murray will get less than £100 per week.

“Nowhere near enough to raise a family.”

She is appealing for people to contribute to a fund to support the family.

Rebekah was first diagnosed after the family returned from holiday in Paris last summer, noticing a large lump had appeared on the girl’s forearm.

She was taken to A&E at Kirkcaldy’s Victoria Hospital, but doctors initially thought it was just a tissue injury.

She was transferred to the Royal Hospital for Sick Children in Edinburgh, and had to have an operation to replace bone in her arm with a piece of bone from her leg.

She has endured six chemotherapy sessions, which so far look at have beaten the cancer.

Rebekah is a pupil at St Andrews High School and Megan is at St Marie’s Primary.

Megan was taken to the same hospital after her family noticed a lump behindher ear as she was eating dinner.

Last week they found out Megan had B Cell lymphoma, a blood cancer.

The girls’ mum Julie, 39, has said: “It was horrendous, when we were told Megan had cancer I just collapsed.

“That day is a blur to me. When we went to the hospital there were three doctors waiting in the room to see us. I knew it was bad news.

“The two types of cancer are completely different.

“One consultant told us there were better chances of us both winning the lottery separately than this happening to us.”

Family friends and the local community are pulling together to run a series of events to raise money for the family.