A SCOTTISH SPCA investigation has led to the chairman of NHS Dumfries and Galloway being convicted for dog neglect.

Michael Keggans, 48, of Sanquhar was sentenced at Dumfries Sheriff Court on Wednesday where he was fined £900 and banned from keeping animals for five years.

He was found guilty of abandoning 12 year old golden retriever Millie at his previous home at Thornhill on the Buccleugh Estate, failing to provide her with food and water. 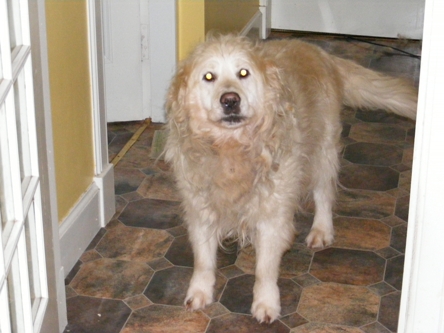 ATROCIOUS ACT – Millie on being rescued from her horrendous ordeal

The alert was raised to the Scottish animal welfare charity after a member of the public made the call as they were concerned about the animal’s welfare.

The dog was subsequently removed from the property on 20 March 2011, with no response from Keggans until March 23.

Inspector Arianne Harkness said: “Keggans is an intelligent and educated individual who should have had enough foresight to make adequate provision for the needs of the dog in his care.

“Millie was found with her thick coat badly matted and her bedding was wet and stained with urine.

“There were several puddles of urine throughout the house suggesting she had been wetting indoors for a considerable period of time.

“Throughout our investigation Keggans evaded contact and showed little concern for the dog that was missing from his property therefore it is fitting that he has received a fine and a five year ban on keeping animals.”