A HEROIC 95-year-old single-handedly saved his 77-year-old friend from a fiery death by hauling a blazing chip pan out her house.

George McLeary had been having dinner at friend May Stirling’s house in Winchburgh, West Lothian, on Saturday evening.

When the smoke alarm went off and alerted them to the fire, Second World War veteran George quickly grabbed the burning fryer and took it outside. 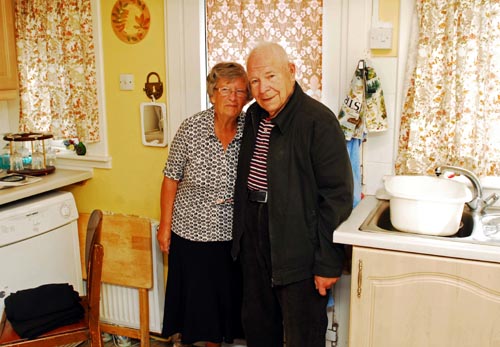 May Stirling in her kitchen with heroic friend George McLeary

The pensioner, who is also from the small town, suffered a burnt hand in the process and had to be taken to hospital by paramedics.

Formerly of the King’s Own Scottish Borderers, George had his original baptism of fire in France and Germany.

She said: “George is my hero as he was very brave.

“I don’t know what would have happened if he hadn’t been here.”

She continued: “I had a chip pan on the cooker and went through to another room so George could look at my sewing machine to see if he could do some repairs to it for me.

“Then all of a sudden he ran off and went to the kitchen.

“Then all of a sudden the smoke alarm went off and he ran to the kitchen.

“There was smoke everywhere as the chip pan was on fire.

“George just grabbed it and threw it out the back door without a second thought.

“He never panicked at all and before anything serious could happen he got rid of the danger.

“He never used a cloth or dish towel to grab it so it burnt his hands a little.

“He only had ca couple of wee marks on his hands but he was very lucky.

“George is very modest and a real gentleman.

“He is a very quiet and private man but he is a great friend.”

George says there was nothing extraordinary about his move to tackle the fire.

he had to have cooling pads applied to his hands and be given oxygen before he was taking to St John’s Hospital.

The grandfather of one said: “I think it is a big fuss about nothing.

“When the smoke alarm went off I ran to the kitchen and the flames were coming out of the pan.

“I just grabbed it and threw it out on to the back grass. It was just instinct.

“The next thing was the fire brigade turned up but everything was fine by then.

“I told the fire fighters and ambulance staff there was nothing wrong with me but they insisted I went up to hospital.

“I don’t even have a mark on my hands now. It’s just what wnyone would have done.”