A SCOUT leader was yesterday recognised for his services to the Scout movement and the wider community as he carried the Olympic Torch as part of the nationwide torch relay.

Kevin Mitchell, from Dunfermline, paraded the streets of Falkirk with the famous flame where the streets were lined with hoards of young people all wanting to thank him for his contributions to Scouting.

The torch visits more than one thousand towns, villages and cities around the UK and also passes by several Scout adventure centres en route. 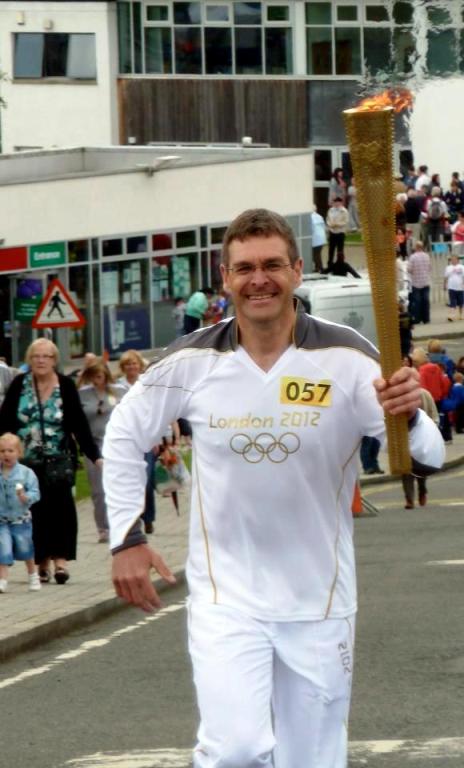 OLYMPIC GLORY: Kevin Mitchell as he parades the torch proudly in Falkirk

The aim of the relay is to highlight the work of Britain’s unsung heroes and Kevin definitely meets that criteria.

He was chosen as a torch bearer thanks to his inspirational volunteering as part of the Scout Movement as well as his dedication in the role of team leader for Ochils Mountain Rescue.

Kevin Mitchell, 50, said: “It is a huge honour and privilege to be selected to carry the Olympic Torch in 2012.

“My scouting history has always been underpinned by ‘getting out and doing it’ and I am delighted to be doing the same with the Olympic Torch”.

UK Chief Scout Bear Grylls said: “I’m super proud that so many Scout volunteers have been rewarded for the adventures they offer young people with this once in a lifetime Olympic opportunity.

“The Olympics is all about unity and friendship two things that Scouting has close to its heart.”