A DISABLED woman was ignored by motorists as she called for help after being robbed and assaulted by an unknown thug.

Rosena Stewart was walking to the supermarket near a busy Edinburgh street to buy her niece a birthday card when the mugger snatched her handbag from her shoulder.

Stewart, who suffers from Huntington’s Disease, a neurological disorder that causes muscle decline and psychiatric problems, was thrown to the ground during the ordeal resulting in her shoulder becoming badly dislocated, leaving her unable to move. 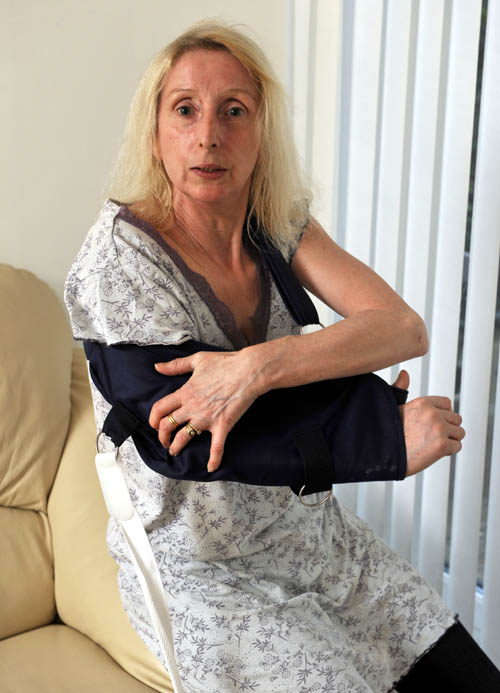 After several minutes, the 52-year-old managed to get herself nearer the road where she began trying to flag a car down for help.

Despite Stewart’s cry for help, no vehicle stopped to come to her aid.

Police are now appealing for witnesses to come forward to try and find the callous mugger.

Today, the mum-of-two explained how she was afraid to leave her house. Stewart, had also complained that she has no feeling in her left arm, which is expected to be kept in a sling for weeks.

She said: “I left home at about 11.30am and I was going to Morrisons to buy the two birthday cards for my wee niece and this person pulled me that fast that it really hurt my shoulder. I was trying to get myself off the ground but I couldn’t move. I was so sore.

“I was so frightened but angry with myself for letting him do it. I thought, you b*****d! I hated him.

“I got up and I was nearly in the middle of the road trying to get help from someone, but the cars were not stopping. I was shouting, ‘I’ve been attacked!’ Then two nurses stopped and they looked after me.”

Stewart was then rushed to the Western General Hospital before being transferred to the Edinburgh Royal Infirmary where she was treated for a dislocated shoulder.

The stolen handbag contained £150, her Huntington’s ID badge and keys to her flat. The locks to her doors all had to be changed.

The suspect who stole the handbag headed towards Pennywell Road after the attack. They were described as white, around five feet tall, with a slim build and wearing a dark hooded top and trousers.

Police detectives said they do not know if the suspect they are looking for is male or female as Mrs Stewart did not see the person’s face.

She said: “I was very frightened and I’m not going out now. It will be ages before I can go back out. I used to go out to the shops every day.”

Stewart was diagnosed with Huntington’s Disease in 2004 and suffers from involuntary body spasms, speech impairment and bouts of depression. Stewart’s relatives often help her get dressed and washed and prepare meals.

Irene Hay, 60, Stewart’s sister said: “She’s always been so cheerful. She tries not to let things bother her and loves company.

“It’s been quite a shock for us. We are a well known family in the area and everybody knows Rosena- they are all very angry about this. The fact she’s vulnerable- that’s what makes us mad.”

A spokesman for Lothian and Borders Police said: “This was a sickening and opportunistic assault and robbery on a clearly vulnerable woman and we are carrying out inquiries in the area to identify the person responsible.”