FURIOUS demonstrators have besieged the new home of Da Vinci Code rapist Robert Greens – just months after he was driven out.

Protesters are furious that the 34-year-old, who brutally raped a student at Rosslyn Chapel in 2005, is back in Midlothian – and living a 15-minute drive away from the scene of the rape.

Greens was moved to an Edinburgh hostel, and then on to a secret location earlier this year after protesters successfully campaigned to Midlothian Council to have the sex attacker moved from a flat in Dalkeith that was surrounded by family homes. 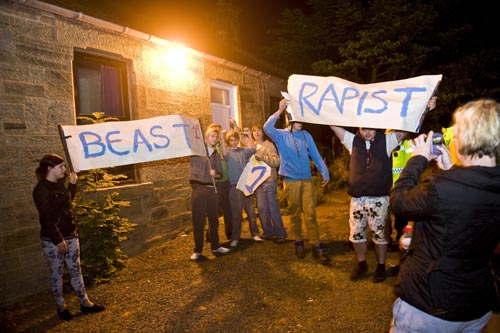 Around 30 protesters made their feelings clear.

Campaigners had their fury reignited last night after it was revealed the sex attacker has been housed in a rural cottage on the outskirts of Bonnyrigg, which was previously occupied by child sex offender William Dunsmore.

The unassuming property, which has a private garden which backs on to dense woodland area, is just a 15-minute drive from the scene of the rape.

A crowd of up to 30 fuming neighbours waved banners reading “Beast” and “Da Vinci Rapist” last night, whilst passing motorists honked their horns in support.

Police and council leaders today attempted to reassure residents, claiming they had no choice but to house the sex attacker in Midlothian, but a Tory MSP said the move lacked “common sense.”

One local mum, who asked not to be named, said police had supplied residents with emergency contact numbers and warned them not to enter Greens home alone. 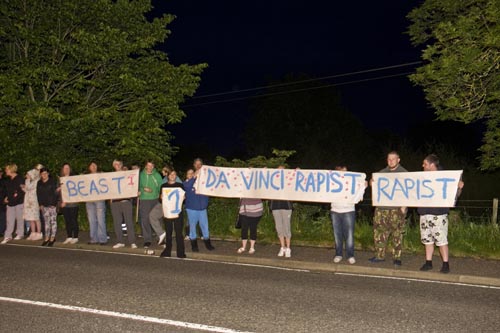 She added: “A policeman came and told me that Greens was living there but to have no fear as he wasn’t a danger to my kids, just me.

“He then told me I could speak with Greens if I wanted but he warned against entering his house or any other enclosed space with him.

“We’ve gone from one extreme to another, first we had a paedophile, now we have a rapist, it’s outrageous. That house, it seems, is a dumping ground for sexual predators.”

Greens, a father of four, was released early from his 10-year sentence for attacking a 19-year-old Dutch student.

He was dubbed the Da Vinci Code rapist after attacking the woman near Rosslyn Chapel, which is featured in Dan Brown’s novel.

The 2005 attack was described by the judge in the case as “one of the worst cases of rape” ever dealt with at the High Court. One witness thought the victim had been in a car crash.

Local residents first became suspicious he had been moved back to Midlothian after workmen put up CCTV cameras and security lights on the front, rear, and side of the property.

A 33-year-old female neighbour, said: “I saw the door being changed from glass panel to just a spy hole and immediately knew something was up.

“I’m quite scared about it, Dunsmore was old and quite frail but Greens is young and mobile.”

Midlothian-born Scottish Conservative chief whip, John Lamont MSP, said Greens should not have been moved back to Midlothian.

He said: “You would think lessons had been learned from last time. The people made it perfectly clear they did not want the perpetrator of such a vile and high profile crime back in the community in which he committed it. He has to be house somewhere, but common sense should dictate Midlothian is not the best place.

Midlothian Labour councillor, Margot Russell, said: It is a difficult situation wherever he does. All neighbours have been notified about this and we will continue to keep them abreast of everything.”