The appearance of the delicate pink buds is a crucial point in the development of the vines, which were planted in Fife two years ago and should produce their first grapes by 2014.

Owner Christopher Trotter is so pleased with the results he has doubled the number of vines to 200 in the garden of his home in Upper Largo. 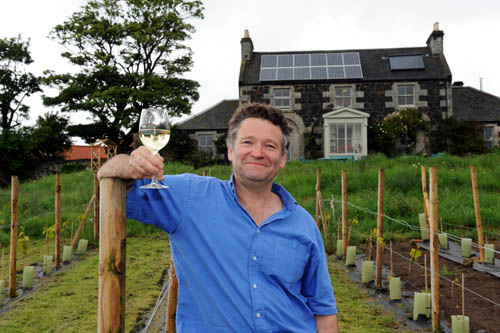 The award-winning food writer hopes to produce the first of 2,500 bottles of dry, white Chateau Largo in two years’ time.

He said: “It has been a very good two years for Chateau Largo. The vines are all looking very healthy and we have now planted an extra 100, which means we have doubled the size of our vineyard.

“I am absolutely delighted that we haven’t lost any at all. There have been no problems over the summer and they are looking very, very, healthy.

“I’m sure global warming has played a role. It has certainly exceeded all our expectations and it’s a very exciting time for us.”

He added: “All the vines we originally planted are now budding ferociously.

“They are coping very well and it’s all very exciting to us. It has been very rewarding for us and that is why we have decided to double the number of vines. I would say that global warming has played a part in the success of the project.”

It is the first time somebody has tried to produce wine commercially north of the border.

Soil experts were called in to give advice before he prepared the land by adding nutrients and organic compost.

All the weeds were removed this year and a two-and-a-half foot deep furrow ploughed to let the vines take proper root.

He said: “We won’t be able to try the wine until 2014 but we are hoping to invite wine experts to sample the product when it is finished.

“This has been a great start for us here in sunny Fife.”

The budding stage is followed by the appearance of flowers which then give way to the first grapes.

Matt Thomson, (34), manager of the Great Grog wine merchants, Edinburgh, said the budding vines were a “great start” for Chateau Largo, but warned there are still obstacles for the project to overcome.

He said: “It’s a great start. The fact that they are budding is very encouraging. Mr Trotter has overcome a number of obstacles, such as harsh weather conditions, to get to this stage.

“I would warn however that there more hurdles for the vineyard to overcome and as he gets closer to harvest time the risks will increase. Ultimately the quality of the fruit is what is important.

“We would certainly like to wish Mr Trotter all the best as the project continues.”

Julia Tristram Eve, of English Wine Producers, added:  “It’s good to see a positive start to viticulture in Scotland. We look forward to hearing a lot more about the project as it progresses.”