ONE of Scotland’s top lawyers and anti-racism campaigners has been forced to apologise after falsely accusing a group of Scottish football fans of throwing bananas at a black player.

Mr Anwar, who is a spokesman for anti-racial campaigns and human rights issues in Scotland, wrote in a newspaper that Jags’ fans “threw bananas and chanted like monkeys”. 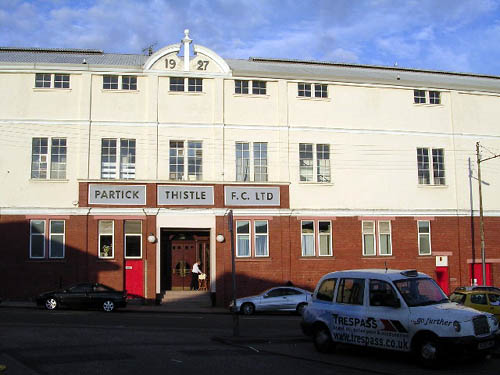 However, furious Partick Thistle supporters have taken to social media sites to voice their anger over the allegations.

They argue that he mistakenly mixed up their home ground, Firhill with Motherwell’s Fir Park stadium, which was the focus of the claims.

A book on Scottish football by Stuart Cosgrove claims fans at Fir Park were responsible for the vile abuse against the Rangers player after he started at the club in 1987, as one of the club’s first black players.

But Glasgow-based Mr Anwar, discussing racism in Scottish football, wrote: “It’s not so long ago that a young Mark Walters arriving at Ibrox was subject to a barrage of of racial abuse as fans from Celtic, Hearts and Partick Thistle threw bananas and chanted like monkeys in an attempt to drive him out.”

Tom Hosie, co-author of the Partick Thistle Legends book, said he was “as angry as I ever been about something relating to the Club that I have supported for 35 years”.

He wrote: “For the avoidance of doubt, Thistle played Rangers just twice while Walters was a Rangers player – a league cup tie and a friendly, both at Firhill.

“Walters didn’t play in the League Cup tie and played no more than 20 minutes of the friendly as a second half substitute.

“There was no racial abuse of Mark Walters that night. Not a single banana was thrown onto the park.

“The claim that Mark Walters was subject to racist abuse in that fixture is 100% false.

“Had such an incident taken place then I would have been ashamed to have been a Thistle fan. There is every chance I wouldn’t be a Jags fan right now.

“The least that Partick Thistle, and more importantly our supporters (that’s me and you) who today have had their good name besmirched, deserve is an unreserved apology from Anwar.”

Fan ian_mac said: “This an absolute disgrace, the club should take legal action.

“Thistle were never even in the same division as Rangers during Walters time there.”

Another fan, Jagsman411971, posted: “If I remember correctly, [former Rangers player] John Brown also accused us of the same thing.

“Both guys were talking s****, because I heard absolutely nothing that constituted racial abuse.

“There was plenty of abuse questioning their religious and sexual preferences, and also some concerning their personal hygiene, but definitely none regarding skin tone.”

Cosgrove, a sports journalist and former NME editor, wrote in his book “Hampden Babylon”, about the kind of abuse which Walters had endured.

The book says: “Week after week, the young black winger was subjected to a barrage of racial abuse, as prejudice squads at Parkhead, Tynecastle and Fir Park threw bananas, chanted like monkeys and banged the jungle drums in a desperate bid to put the player off his stride.”

A research article in the journal Scottish Affairs, written by John Horne of Heriot-Watt University in 1995, appeared to make the same mistake as Mr Anwar.

Fairest in the game

Reacting to Mr Anwar’s comments, Scottish Conservative Glasgow MSP Ruth Davidson said: “Partick Thistle fans are known not just in Glasgow, but right across Scotland as some of the best and fairest inthe game.”
Today Mr Anwar offered his sincere apologies to the club over the error

He stated:  “I apologise unreservedly.

“I think there was confusion.

“I understand why people got upset. It wasn’t written as a deliberate attack.

“The article wasn’t written out of vindictiveness.”

Mr Anwar acted for the family of Surjit Singh Chhokar, the waiter who was killed in 1998.

No-one has ever been convicted of his murder and Mr Anwar has appealed for the case against Mr Chhokar’s killers to be reopened under double jeopardy laws.

One of Mr Anwar’s most well-known clients was former Socialist politician Tommy Sheridan, though Sheridan took on a new lawyer in April this year.

Mr Anwar was also a close friend of Celtic’s lawyer, Paul McBride QC, and was with him on a business trip to Pakistan earlier this year when he died of a heart attack.