A WOMAN has received a £200 fine and a three year ban on keeping more than one dog after being convicted for dog neglect following an investigation by the Scottish SPCA.

Lisa-Marie Watson, 27, of Alloa, Clackmannanshire admitted to causing her cross breed dog, Tairi, unnecessary suffering by failing to take her to a vet for treatment she required for a serious skin condition as well as neglecting to provide her with food and water. 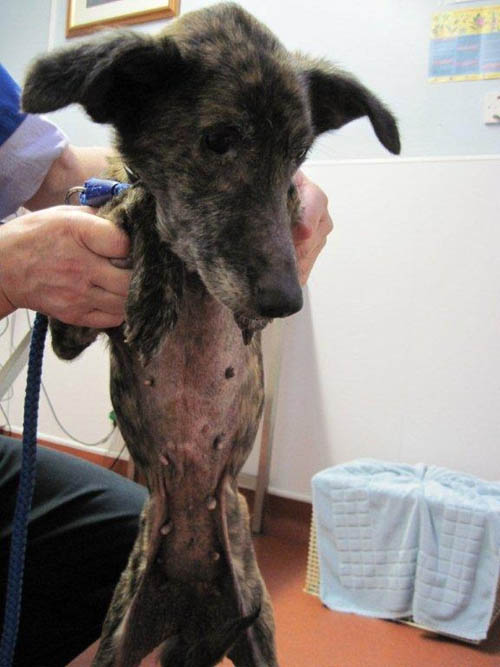 The fourteen year old animal was rescued and taken to a veterinary centre where it was determined that she was severely emaciated and suffering from a serious skin condition.

Despite lengthy treatment at the charity’s Edinburgh and Lothians Animal Rescue and Rehoming Centre, the veterinary advice was that since Tairi’s condition had deteriorated the kindest option would be to put her down.

Inspector Louise Seddon said, “This was a very sad case where the owner had ignored her dog’s health to the point where she had become so unwell that it was impossible for her to recover.

“Tairi suffered in silence from a painfully inflamed skin condition which originated from an untreated flea infestation. Because this had been ignored infection spread and eventually her entire body, including inside her ears and under her eyelids, were affected.

“The vet who examined Tairi concluded that she had been caused severe discomfort and pain over a prolonged period of time.

“Furthermore, Tairi was extremely thin as a result of not being fed a proper, nutritious diet.

“Although we are pleased Watson has been convicted of this offence, we are disappointed that she did not receive an outright ban on keeping animals.

“We would have concerns for any animals remaining in Watson’s care, particularly if they ever became ill and required veterinary attention.”