Owner asked for cash before dog’s remains could be returned

THE owner of a death row dog was told she would have to fork out £144 if she wanted her beloved pet’s ashes returned.

C-Jay was put down after attacking a neighbour’s 17-year-old cat.

The four-year-old Staffordshire Bull Terrier cross was the subject of a long-running court case after he escaped and attacked Bobby, breaking several bones. 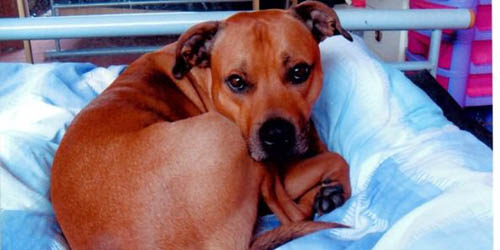 His owner, Tracy Jackson, of Dundee, went to court last month in a failed bid to challenge the decision to have C-Jay put down

Last Thursday, she got a call to say C-Jay had been put down.

Tracy, , said she received another call yesterday (Thursday) asking her what she wanted to do with the body.

She said: “I got a phone call this morning (Thurs) from somebody who asked if I wanted his ashes or if we wanted him brought back to us.

“Five minutes later he phoned back to say that it was going to cost £144 for his ashes – how can I afford that?”

C-Jay was returned in a box wrapped with black tape.

Tracy, who buried her pet in the garden, said: “I had the box in the kitchen and the smell was just horrendous. Then I had to take him out of the box and take out the plastic bag he was wrapped in.”

She added “I just feel let down. It shouldn’t have happened anyway. For a dog to attack a cat and then go away to a kennel for 10 months and then get brought back in a cardboard box – where’s the justice there?”

“They’ve never let me go and see him. In the 10 months he’s been away they’ve never told me where he was. I think they’re making an example of C-Jay because he’s a cross staffy.”

Ian Rob, chairman of charity Help for Abandoned Animals in Arbroath, has been supporting Tracy after meeting her after C-Jay’s first hearing.

He said: “I can’t understand how anyone could do this to a woman who has been tortured for over a year. Shes’s at home sitting in her kitchen staring at a box with her dog’s body in it.

“I am totally, utterly disgusted that anyone could do that to a poor woman who has been grieving, wondering if she will see the dog again.”

C-Jay turned four on 11 June, three days before his owner was told of his fate.