Gaelic signs to appear on routes across the country

GAELIC road signs are to appear on routes across the country under new plans being drawn up by the Scottish Government.

Dual-language signs for towns and cities, including Edinburgh and Glasgow, will feature on motorways and dual-carriageways under new proposals published by Scotland’s national Gaelic agency – Bord na Gaidhlig this week. 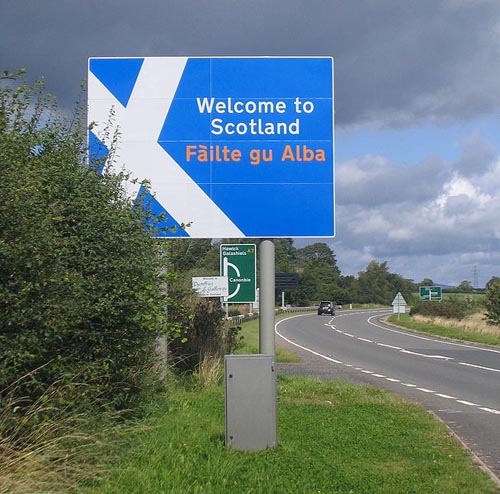 Gaelic language signs have appeared on roads in the Highlands for years, despite concerns they could confuse motorists.

One sign at the Scottish border has the phrase Failte gu Alba (Welcome to Scotland).

To save public funds Gaelic would be incorporated in new signs only when older ones need be replaced.

John Angus MacKay, chief executive of Bord na Gaidhlig, said: “We want Gaelic to be more visible in Scotland to normalise it in Scottish life for those learning it. We want the next generation of children to feel comfortable about being bilingual in a Scotland that visibly recognises the importance of that element of Scotland’s identity.

“To do that, road signs and other things are important. But it is also the case that we haven’t used the Gaelic identity enough to promote Scotland, as the Irish have done successfully.”

MacKay said tourists would like to experience living with a minority language, and greater steps should be taken by Visitscotland, to promote Gaelic in its promotional materials.

The language is set to gain publicity with tourists after the release of Disney Pixar film Brave, which features Gaelic melody, Tha mo Ghaol air ird a’ Chuain (My Love is on the High Seas) performed by Julie Fowlis from the Western Isles.

The Scottish language has been in decline for decades, but the rate has slowed in recent years with many parents choosing to educate their children at Gaelic-medium schools.

Numbers of pupils at Gaelic schools it at a record high in Glasgow, Edinburgh and Inverness.

Many parents have been attracted by evidence of higher rates of attainment in Gaelic-medium units. Bilingualism has been found to help cognitive development, especially among children who can then pick up a third and fourth language more easily.

MacKay said: “We’ll continue to lose older speakers, but we know from the census statistics that the rate of decline slowed between 1991 and 2001.

“I’m quite positive about the future because we are getting systems into place to support the language in a way that we haven’t in the past. The national plan helps with that, but in addition we see more activities in communities.

“We are putting into place a system that will give the language more prominence and encourage people to learn and use it.”

Members of the public needed to ensure future of dying language