GREEN-fingered Scots are being warned about an increase in garden slugs – after wet weather conditions have created an explosion of the slimy pests.

Experts say slug numbers are likely to double in the next year, as soggy weather conditions in Scotland have produced perfect breeding conditions for the garden foe.

Fruit and vegetable farmers have also warned of crop shortages and price rises caused by growing numbers of slugs, who munch through plants and cause damage to soft fruits. 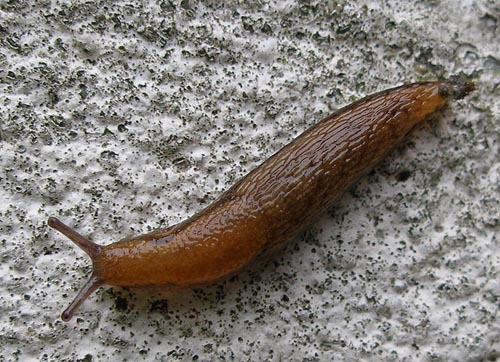 Slugs are set to double in numbers in the next year.

The combination of a mild, frost-free winter and a rain-sodden spring are thought to have created ideal conditions for the slimy creatures living in Scotland.

B&Q, the UK’s biggest garden retailer, has seen a 44 per cent rise in sales of slug pellets in recent weeks.

The Royal Botanic Garden in Edinburgh has not escaped the devastation caused by slugs.

“We have all different types of environment at the gardens and have a slug that fits every one of those. The big grey ones live in the rock garden and are eating the alpines.

“Our dahlias have been well chewed and the tulips outside the palm house got badly attacked. Our hostas and delphiniums have been quite well eaten.

“The wet weather in spring and early summer has provided perfect conditions for slugs, and snails, hence the population explosion.

“The decline in the number of thrushes can go some way to explaining the increase too, because slugs are their favourite meal.

“They are causing quite a lot of damage. We really need a lot of dry, warm, sunny weather to get rid of them.”

Slug expert Dr Les Noble, a reader in molecular zoology and genetics at Aberdeen University, said the wet weather and interbreeding of foreign species with native black slugs was leading to an increase in the slug population.

He said hybrid slugs can lay four times as many eggs as native slugs, from 100 to 400 eggs.

He said: “People are also using more environmentally-friendly methods of gardening,” Noble said. “They have composts and, rather than throw away grass cuttings, leave them on the surface. All this provides a fabulous habitat for slugs.”

Dr Noble said it was the hybrid slugs that were causing the major problem, claiming Scotland faced the same dilemma as parts of continental Europe.

He said: “There are slug plagues in Scandinavia which are destroying soft fruits.

“The plagues are also causing slug slicks on roads, causing accidents. Slugs, as well as being self-fertilising, are cannibals and when they smell dead slugs that have been crushed by cars they can gather on the roads.”

He believes slug populations have doubled or even tripled this year as certain breeds lay hundreds of eggs at a time.

Dr Meredith said: “The conditions over the past couple of months have been really good for the slugs to reproduce. As long as it’s wet and warm, they just keep going.

“They like the rain and now we’ve had months of it the slugs are thriving. If it carries on the way it is, we can expect to have a serious challenge with protecting crops.

In Scotland the prolonged wet weather this year has meant breeding conditions have been ideal, and the emerging molluscs have been able to munch unhindered by the warmer weather that would normally force them underground.

Crops are most at risk from Grey Field slugs, as they keep breeding throughout the year, each one capable of producing millions of offspring – as long as the conditions are right.

Dr Meredith added: “Potatoes are at a big, big risk – they are in the ground now, but farmers are going to have to start laying down slug pellets now, rather than in July or August. Potato growers should be worrying – pricing kicks back down the line, so the consumer will only see the price of potato products go up if the growers really struggle with their crop this year.”

Large slugs can develop up to 27,000 teeth and can eat twice their own body weight every day.

The Horticultural Development Council estimates that in a normal year slugs cost farmers £8 million, but if this year’s trend continues costs are more than likely to be doubled.