Without a paddle: Rescuers called in for canoeists stuck in 4ft of water

TWO canoeists were left red-faced after they sparked a major rescue operation by getting stuck clinging to a fallen tree – in less than four feet of water.

A team of more than twenty firefighters backed by  six fire engines were called out to the Stockbridge area of Edinburgh after the canoeists discovered the Water of Leith was blocked by a tree.

The men – aged 19 and 37 – grabbed hold of the tree, got out of their canoe, and planned to jump to the riverbank. 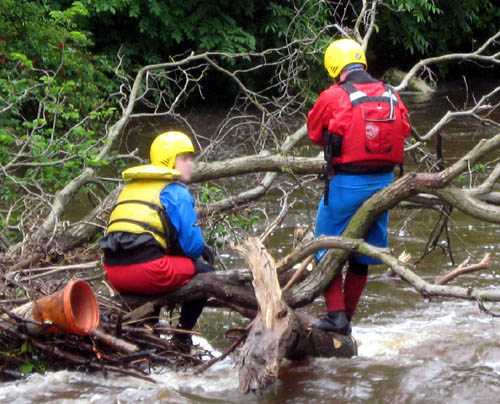 CONFUSED CANOEISTS – The two men had over twenty firefighters help rescue them despite the water being only 4ft deep   Photo: John W Wallace

But after realising they could not make the shore, the men had to sit tight and wait for rescue.

The drama was watched by a crowd of locals, including actor John W Wallace, who has appeared in River City and Take the High Road.

The 62 year old who regularly fishes in the river said: “They encountered a tree which had fallen down into the river last year or the year before and they couldn’t get past it.

“I couldn’t understand why they went on to the tree.

“There was plenty of space for them to go to the right of the tree and through. I think they panicked and they didn’t check their terrain.

“Within a short period of time there was about five fire engines, two ambulances and a whole batch of maybe 15-20 rescue people – I have never seen anything like it; it was overkill.

“All the guys had to do was get off the tree and wade about six to seven feet to the wall and walk up the side to the steps.

“They were really embarrassed. I don’t think they were local.” 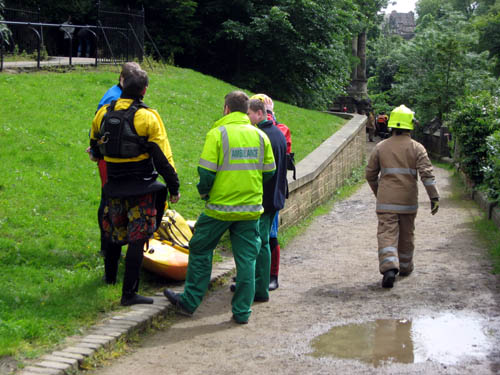 OVER THE TOP: The men seemed embarrassed about the dramatic incident  Photo: John W Wallace

According to Mr Wallace, the men remained on the tree for around forty five minutes before the rescue team came to establish the best route forward.

A spokeswoman for Lothian and Borders Fire and Rescue Service stated: “Two adult males were stranded on a partially submerged tree which had been washed down the Water of Leith.

The team were able to use a ladder and specialist water rescue equipment in order to get the men on to the riverbank safely.

They were examined at the scene by paramedics but did not require any further medical attention.