A SCHOOLGIRL suffering from a rare form of cancer is being flown to the US for cutting-edge treatment that could save her life.

Niamh Yates, 12, will receive Proton Beam Therapy (PBT) at a hospital in Florida after the NHS agreed to meet the £120,000 bill.

The technology – which will not arrive in UK hospitals for another five years – allows doctors to direct a very precise beam of radioactive particles at cancerous cells. 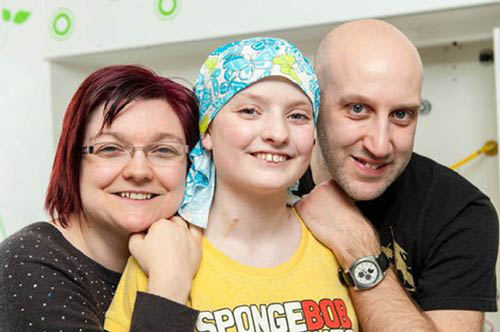 Niamh, from Tranent, East Lothian, has a very aggressive tumour near her spinal cord and the proton beam treatment is accurate enough to tackle the cancer without killing healthy tissue.

She is suffering from undifferentiated sarcoma, which was diagnosed in January after she complained about back pain and mobility problems.

The survival rate among children is just 50%.

Brave Niamh has already had to endure seven hours of emergency surgery to prevent her from suffering permanent paralysis due to the location of her tumour, extensive physiotherapy and six cycles of chemotherapy

But her only current hope of beating the disease lies 4,000 miles away in the University of Florida Proton Therapy Institute in Jacksonville.

She is due to fly to the Sunshine State next month for a nine-week course of treatment. It is not known if any other Scots have received the treatment.

Protons, which make up the nucleus of atoms, are used because the particles can be directed much more accurately than X-rays.

PBT is due to be available at hospitals in London and Manchester from 2017.

Although the NHS has agreed to pay the cost of the treatment, her parents, Paul and Julie, need to raise almost £20,000 so they, and son Conor, six, can go on the trip.

The couple, who have so far raised £12,000, hope Niamh will be able to fulfil her ambition of swimming with dolphins while in Florida.

Paul (37), a salesman, said his daughter was determined to recover from the illness.

He said: “Niamh has shown a bravery and a maturity way beyond what you would expect a 12-year-old to display.

“She’s very pragmatic in her approach to her treatment, despite the often unpleasant side-effects she’s had to endure, because she is absolutely determined that she will get better.”

Julie and Paul have both kept an online diary of their experiences of coping as a family with Niamh’s cancer.

Julie said: “They say childhood cancer is rare, but I’m now in a situation where it is the norm. As time goes on I meet more and more people who are in the same situation. All I ever see are rare childhood cancers.”

The couple hope to set up a charity once they have returned from the US, to support families going through similar cancer battles, and to arrange awareness of childhood forms of the disease.

Julie added: “We are also aiming to offer financial help and little treats to others who find themselves in the same terrible situation we found ourselves in January. The initial costs incurred when you are first diagnosed, such as parking fees are crippling.

“We have been overwhelmed by the donations and offers of help – it’s truly humbling.”

Writing on her All About Niamh blog, Julie said her life had been “turned upside down” following her daughter’s cancer diagnosis.

She wrote: “The pain was indescribable, like someone’s ripped your heart out. I was numb. I rang Paul then my mum, I could barely speak. I just sobbed and sobbed on the phone to them. It was so much to deal with. I got it out of my system and then I composed myself, dusted myself down, washed my face and prepared to go back in to be strong for her and I continue to do so.

“To this day she has never seen me cry over her illness – not saying she never will but so far she hasn’t.”

To make a donation to Niamh and her family, you can visit www.gofundme.com/allaboutniamh