A SHOP which was raided after the death of a young man who had taken Benzo Fury is selling the same drug.

Apothecary, on Edinburgh’s South Clerk Street, sells the “legal high” for £10 a pill or three for £25.

Alex Heriot, 19, died last month after taking the drug at the RockNess festival near Inverness. 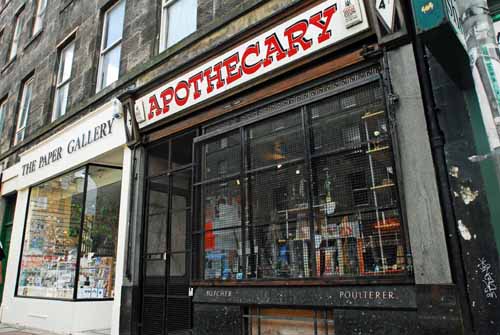 Apothecary was raided following the death of a teen at RockNess.

There have been calls to ban the “legal high”, which is also thought to have put Alex’s girlfriend and another young person in hospital at the same festival.

Apothecary was raided on 12 June by detectives who were working with Northern Constabulary investigating the student’s death.

Officers carried dozens of bags and buckets out of the shop, some containing herbal substances.

But this has not stopped Apothecary from selling Benzo Fury.

On Friday, an assistant at the shop initially told a reporter they did not have any pills for sale, saying they were limited to smoking materials.

But a minute later, the assistant changed his mind.

After an ID check, the assistant offered the pills for sale.

He said: “How many Benzo Furies do you want? We do still do them but it’s regulars only.”

Three packs were bought for £25.

The packs are not on display but are kept in a drawer under the counter.

Benzo Fury comes in small orange packs, which have “research chemical pellets” emblazoned on the front.

A picture of the chemical compound can also be seen on the front, and the back lists its ingredients as 6-APB, microcrystalline cellulose and magnesium stearate.

Warning logos say it is “harmful” and “not for human consumption.”

Another symbol says it is not for sale to anyone under 18.

Alex’s mother, Deirde, today pleaded with youngsters not to “bereft” their families through irresponsibly taking drugs.

But with T in the Park, Scotland’s biggest music festival, coming up on the 6th of July, Deirde fears her pleas for moderation will probably fall on deaf ears.

She said: “I really don’t think that anything that a middle aged, grieving mother can say will stop young people doing what they want to do, the hubris of youth (and even middle age) means that you don’t think it will happen to you.

“I suspect that youngsters may think again this year, but what will happen next year?”

She added: “I think that the death of a vibrant, popular 19 year old should really speak for itself.

“I’m not naive enough to think that this was the first time Alex took drugs but I do stand by my initial statement when I said he was not an habitual drug user.

“Alex’s family and friends are – again as I’ve stated before – devastated by his loss, this is absolutely not what he intended, he was young and enthusiastic and enjoying himself at a music festival.”

Alex’s firends have called for the government to consider banning Benzo Fury, and the Advice Council on the Misuse of Drugs has confirmed it is investigating.

When asked why the shop was still selling Benzo Fury, a spokesman
said: “No comment whatsoever.”