AN investigation has been launched after a family was driven from a cinema by sound levels that reduced a young girl to tears.

Emma Foster, three, had to be rushed out of the showing Ice Age 4 within minutes, tears streaming down her face and with her fingers in her ears.

The tot from Edinburgh needed painkillers and her father said his ears were ringing for hours afterwards. 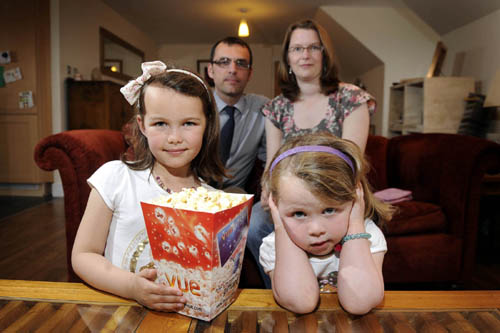 Emma and Lucy Foster, 3 and 5, with parents Andrew and Gillian after their cinema ordeal.

Now environmental health chiefs are to investigate whether sound levels at a Vue cinema in the city broke the rules.

Inspectors armed with sound meters will measure peak sound levels at the cinema to see if the audience’s hearing is being put at risk.

Concern about cinema noise levels has been mounting after sound systems hit 95 decibels at some UK screenings, almost as loud as a pneumatic drill.

Andrew and Gillian Foster took Emma and her five-year-old sister, Lucy, to the screening in Ocean Terminal, Leith, on Sunday afternoon.

Andrew, 41, said: “We were there just having a good time and then the trailers started and bang! This wall of noise hit us. It was deafening.

“Lucy had her fingers in her ears. Emma was getting distressed and she was crying.

“A few minutes after the film started Emma was asking her mum to take her out. My wife came back in and said I would have to take her home because it was just too loud for her.

“She was saying her ears ached and that she wanted Calpol. My own ears were ringing about 12 hours later.”

Mr Foster complained to the cinema manager and only received a half-refund for the family ticket that they paid for.

He was told by the cinema manager that the trailers are always louder than the movie and that the Fosters were the first people to complain about the sound levels.

Mr Foster added: “As an adult I know what to expect, but I’m finding it louder in cinemas than it used to be. It seems every cinema now has got to be louder and bigger and better than its rivals.”

The British Standards Institution has said that the “ear shattering” noise levels experienced in the cinema are enough to cause real lasting damage to hearing.

According to the BSI average sound levels recorded during commercials and trailers are much higher than those in the feature presentation in order to make their products stand out.

Film trailers are advised to be broadcast at no more than 85 decibels, but movies like Saving Private Ryan, Armageddon and Star Wars: The Phantom Menace reached a deafening high of  95 dB.

That is louder than a motorbike and not far off the 110dB created by a pneumatic drill.

However, Swedish cinema design engineer Torkell Saetervade is one of those who refutes the warnings.

“Young audiences like the cinema to recreate reality. If they think it’s too quiet, they just feel there’s something missing, shrug their shoulders and don’t come back”.

A Vue spokeswoman said that the noise levels were monitored to a safe level and that the aim of the Vue is to provide the “best possible experience”.

She said: “We will go on to check these levels before the screening the film to the public.

“Our aim is to ensure the best possible cinema experience . Where necessary we adjust the volume levels depending on the type of film and the audience watching it.

“This is especially the case for films which appeal to children or a mature cinema going demographic.”

A council spokesman said: “We have received a complaint which we will look into.”