AN animal cruelty advert showing a dog which starved to death has been cleared for use despite complaints it was unsuitable for children.

The advert was part of a leaflet printed by the Scottish SPCA and showed the skeletal remains of a two-year-old Staffordshire bull terrier called Jack.

Four members of the public complained to the Advertising Standards Agency (ASA), saying the advert was irresponsible because it could be seen by children. 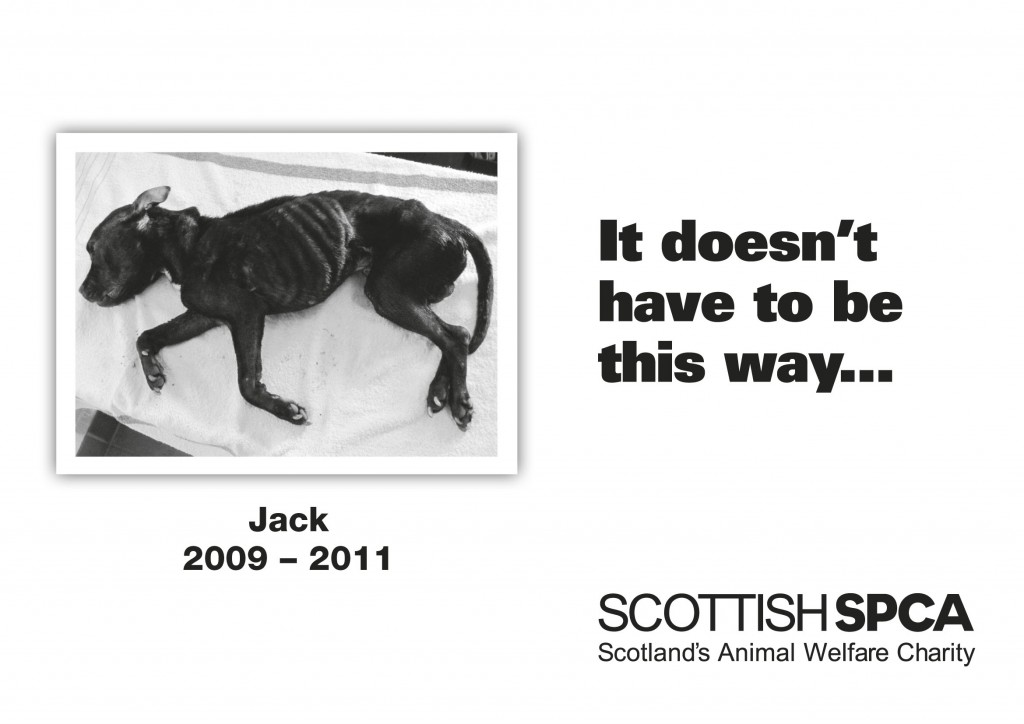 The controversial ad that sparked complaints due to its shocking images.

But the ASA ruled the leaflet, published n February, was justified to highlight the “distressing” subject of animal abuse.

The SSPCA welcomed the decision, saying the issue should not be glossed over.

The circular leaflet, which was posted without an envelope, then invited £1-a-week membership of the organisation.

Jack was found dead in Edinburgh in 2011, having been starved to less than half its normal weight.

Owner Darren Dallas, from the city, was given a life ban on keeping animals and three years probation after an SSPCA investigation.

He had dumped the dead dog, which choked after finally being given food, into his neighbour’s garden over a fence.

The complaints were submitted to the ASA via their online complaints form, which the first coming in on 28 February.

The ASA adjudication said: “We noted that such a distressing subject was likely to cause discomfort when presented in any medium.

“Nevertheless, we took the view that any discomfort inherent in the subject of animal cruelty ought to be balanced by the worthwhile purpose of raising awareness of their cause.”

It continued: “We noted the circular had been delivered without an envelope and featured an image of a highly emaciated dog.

“However, whilst we considered the inclusion of the image was likely to cause distress to some, including children, we considered that any distress caused was justifiable and was therefore not irresponsible.”

Announcing its decision today, the ASA investigated if the advert under their “social responsibility” and “harm and offence” rules, and found it was not in breach.

Responding to the decision, SSPCA Chief Superintendent Mike Flynn
said: “We believe the public should be aware of the harsh realities of our work and the extent of cruelty to animals in Scotland.

“Sadly, each year animals continue to suffer abuse and neglect and if we glossed over this issue the public would not know why we desperately need their support.

“As a charity which receives no government or lottery funding, we rely on public donations to continue our vital work rescuing abused, abandoned and injured animals.

“It is never our intention to cause offence or distress, particularly where children are involved.”

The reverse side of the leaflet showed before and after pictures of another dog called Willow, which was rescued by the SSPCA.

It said: “You can save animals from abuse Jack was so starving hungry when he finally ate he choked to death. It’s hard to imagine how that must have felt.

“Sadly, last year we had too many cases like Jack’s. But it doesn’t have to be this way.

“With your support we can rescue abused, abandoned and injured animals in Scotland and we can help take people responsible to court.

“Poor Willow was skin and bones when she arrived in our care. In fact, we were worried she wouldn’t make it through the night.

“But thanks to our supporters we were able to nurse Willow back to health and find her a loving new home. We also found her owner, who was prosecuted and banned from owning animals following our investigation.”