RACY bestseller Fifty Shades of Grey has sent temperatures soaring across the land but for one Scottish mother the novel literally started a fire.

Shona Gilmour was so engrossed in the steamy tale she forgot that she had put her chip pan on.

The mother-of-two had reached a particularly “interesting” part of the book when a sheet of flame exploded across her kitchen. 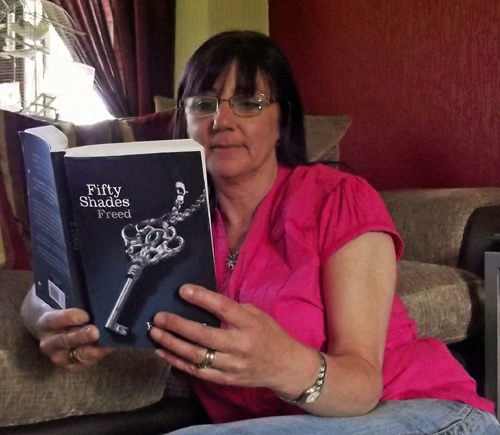 Shona,  from Troon, South Ayrshire, was wrenched out of the torrid fictional world of Christian Grey and Ana Steele and into the role of a firefighter.

Thankfully, the 47-year-old was able to overcome the flames without injury or any serious damage to her kitchen.

But her husband has banned EL James’ literary efforts to their bedroom.

The 50 Shades trilogy has become the biggest selling paperback in UK history, and details the raunchy relationship between wealthy businessman Grey and young graduate Steele.

She said: “I went to kitchen and started heating the oil in the chip pan and then I sat at the table and started reading my book.

“After a few minutes I put the chips in and quickly got back to the book – it was at an interesting bit.”

Shona was so engrossed she failed to spot smoke starting to curl out of the pan.

She said: “Next thing I know there’s oil spilling everywhere and flames all over the place.

Cool-headed Shona’s handling of the blaze stopped it burning her entire house down.

She switched the gas off and smothered the flames, leaving nothing worse than a few scorch marks and spilled oil to clean up.

“Then I went back and finished my place in the book,” she said.

Shona admits she can’t get enough of the trilogy, saying it leaves her late for work, forgetting that she’s running a bath and keeping her up until 3am.

Husband Alan appears to be reaching the end of his tether.

Shona said: “The mister wasn’t happy about the fire.

“He said it was about time I got rid of the book now after that wee incident – but not a chance!”

“But now I keep it in the bedroom – that’s its new home.”

Strathclyde Fire and Rescue today advised chefs to keep Fifty Shades out of the kitchen.

A spokesman said: “When it comes to cooking, the only hot stuff should be on the stove so please, before you read anything else, read our fire safety advice at www. Strathclydefire.org.”

He added: “Chip pans present a very real danger and must never be left unattended – no matter how tempting the distraction.”

It is not the first time the 50 Shades trilogy has caused trouble.