BRAVE Scottish otters are standing their ground against an aggressive foreign invader – the American mink.

Experts believe otters’ determination to protect their habitat is stopping the spread of the mink through Scotland’s waterways. 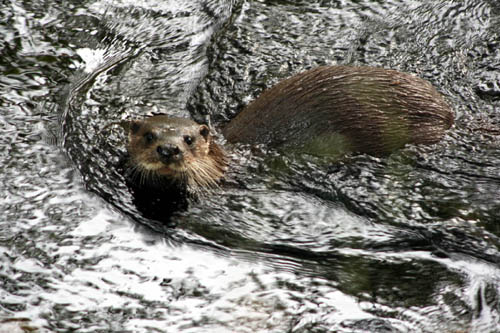 One farmer reported seeing a otter tearing a mink to shreds

And a documented case has emerged of an otter tearing an encroaching mink to pieces.

Mink were introduced from the US to Scotland in the 1950s to breed for their fur. But enough escaped for the species to take hold in the wild and start spreading.

An estimated 20,000 mink are roaming free and have been blamed for attacking birds, fish and smaller mammals, disrupting eco-systems.

Specifically, they have been blamed for the decline of water voles in Scotland.

But it seems the mink has met its match in the sleek shape of the native Scottish otter.

Fen Howieson, a bailiff with the Forth Fisheries Trust, said he witnessed a fight to the death in the River Almond, West Lothian.

He said: “I was on patrol when I saw the two animals approaching each other.”

The animals growled at each other and the mink refused to back down.

“The otter tore it to shreds,” said Mr Howieson, who found the mangled corpse of the mink shortly afterwards.

It also appears that a single brave otter is reducing mink numbers in some 24 miles of the Water of Leith as it meanders through and beyond Edinburgh.

Helen Brown, of the Water of Leith Trust, said: “Otters could be the reason why there are less minks on the water.”

She said the female – nicknamed Otto – was first spotted in 2006 and has even been spotted in the docks at Leith.

As well as scaring off mink, Otto even forces out her own cubs by the time they are nine to 12 months old, forcing them to fish for themselves.

Waterways expert at Scottish Natural Heritage, Rob Raynor, said: “Otters can attack mink because they’re bigger animals, they can prey on their young or they can just mark over minks’ signs.”

But Professor of Ecology at Aberdeen University, Xavier Lambin, said it was unlikely otters would win a final victory over the mink.

He said research showed mink were adapting to the threat posed by otters, even becoming nocturnal to skirt around them.

“It would be a happy ending if the rise of the native otter would lead to the demise of the mink,” he said. “But it’s not like that.”

Otters are also getting human assistance in the war on mink.

The Rivers and Fisheries Trusts of Scotland (RAFTS), who help run the Scottish Mink Initiative eradication programme, said they had just passed 200 mink killed in total since the scheme began just over a year ago.