A SCOTS businessman has died in Turkey after plunging from the fifth-floor balcony of a hotel following after reportedly separating from his wife.

Neil McIntyre, from Perth, struck a canopy over the entrance of the building in the Altinkum resort, about 100 miles south of Izmir.

Paramedics rushed to save the 61-year-old following Monday night’s horrific incident but he died of his injuries. 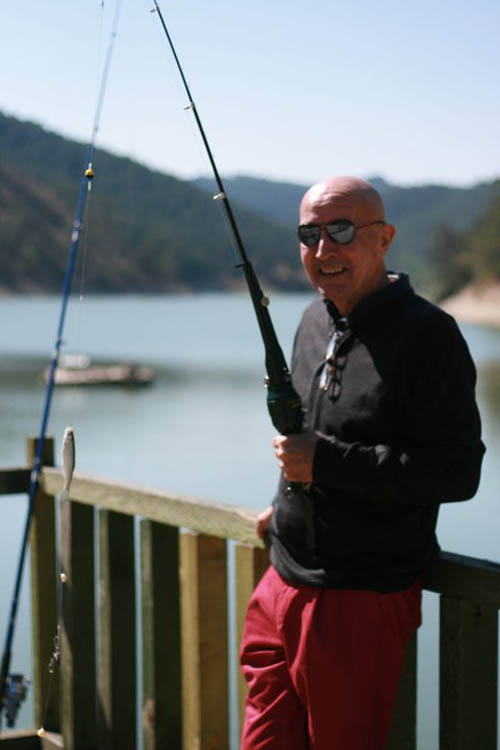 There were reports of marital troubles between Neil, above, and his wife Drita before his death

A well-known businessman in Perth, he had formerly run a baker’s shop before moving abroad around five years ago and opening a chip shop in Altinkum.

He and his wife, Drita, who he met after moving to Turkey served traditional British food at their premises, called The Chippy.

An local English language newspaper, Altinkum Voices, reported claims there had been “domestic troubles” between the couple.

The newspaper said it was reported that Mr McIntyre was still living at home but that his wife had moved into room 503 of the Guclu Aparthotel from which he fell.

A local owner owner, Emin Atyemur, was reported as saying: “There had been arguments between the two, but they seemed better in the few days before his death.

“On Monday they were open as normal. He was very quiet.

“Later, I think he had taken her keys for some reason, because his wife was still waiting on customers at the time when the incident had occurred.”

Shona Tekinda?, owner of a bar near the hotel, added: “I am still in utter shock as Neil was such a lovely, pleasant and nice man who always had a smile on his face.

“Neil and his wife were in the bar at Christmas and they seemed happy together.

“Everyone around here who has a business are just in deep shock at the manner of his death.”

Perthshire Chamber of Commerce chief executive Vicki Unite (corr) said: “This is a tragic event and our thoughts are with his family and friends in such sad circumstances.

“Mr McIntyre was a popular member of the Perthsire business community for many years and he will be sorely missed.”

Another person who knew him from Perth said: “A lot of people will be saddened by his death, he was well-known locally.”

The Chippy was open from 3pm to 3am every day during the summer season, and the couple worked long hours.

Mr McIntyre had recently said of his business: “It is the nearest we could get to being a traditional chippy back home and, from the diners’ reactions, i think they really appreciate it.”

A Foreign Office spokesman said: “We can confirm that we are aware of the death of a British national in Turkey.

“Our consular staff have been in touch with his next of kin in Turkey to offer assistance.”