A TERRIFIED three-year-old girl had to be plucked to safety from a top floor window after sick thugs set light to a pushchair in the stairwell.

Firefighters used a turntable ladder to rescue the youngster from 40ft above the street after thick smoke filled the building in Edinburgh last night.

The girl’s parents also had to be rescued from the four-storey building and all three were taken to hospital suffering from smoke inhalation.

Disgusted neighbours today expressed horror and disbelief at the attack, which left the common stair of the flat covered with a thick layer of soot.

Lothian and Borders fire brigade said they were called to Argyle (corr) Place, in the Meadows area of the city, shortly after 9pm.

The fair-haired tot escaped through her bedroom window, which was decorated with bright yellow flowers.

A witness, who asked not to be named, said: “One firefighter hugged the girl and then took her down.”

Once in safe hands and away from the building, the girl’s fear seemed to disappear, said the man.

“She looked smiley enough by the time she got to the ground,” he said. “The entire fire brigade were wonderful.” 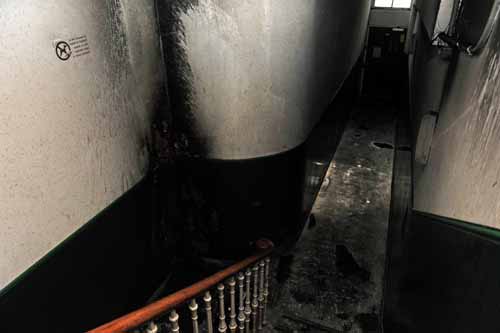 Ged Cameron, owner of Argyle Backpackers in the street, said: “There were three or four fire engines outside. They sent up the lift for the little girl and I just about cried seeing her being lifted from the window. It was so emotional. They took her out the window but she was the only one. Everyone else came down the stairs”

It is understood that, having rescued the girl, firefighters decided to evacuate her parents using the stairs, waiting until smoke levels were safe.

The mother, the girl and her father, named locally as Scott Taylor, were put in an ambulance and taken to Edinburgh Royal Infirmary for treatment.

Murat Guvn (corr), who also witnessed the rescue said:  “The little girl must have been terrified. The height is enough for anyone.

“The girl’s mum came down the stairs after her and was wearing an oxygen mask to help her breathe through the smoke.

“Her dad then came down last with their dog, a spaniel, on a lead.

“They were all trying to appear normal but it must have been the shock.”

He added: “They must have all been so scared but luckily nobody looked that badly harmed by the fire.”

Trevor Gait, who lives in opposite the tenement said: “Why would somebody do this? They must be sick.

He added: “Hopefully somebody is found and punished for this, people could have been badly injured or even died.”

The top floor neighbours of the family moved in to the property just four hours before the blaze was started.

A relative, Dorothy Graham, said they had gone out for a meal when the pram was set on fire.

She said: “My niece just moved in at about 5pm last night from Aberdeen.

“We were helping her get settled and then this happened.

“The smoke damage is awful. It is such a shame, the stairs were so well kept but now they are just ruined all the way to the top by black smoke. It’s everywhere.”

Lothian and Borders Fire and Rescue said 18 firefighters were involved in the rescue operation.

A spokeswoman said: “The fire originated in a push chair that was left in the entrance to the communal steps and was giving off thick black smoke. It is believed to have been started deliberately.

“A child aged three had to be rescued by ladder. The parents were also led to safety.

“The whole family has been taken to hospital to receive treatment for smoke inhalation.”

Lothian and Borders Police said it was not clear whether the pushchair belonged to the family but there was nothing to suggest they had been targeted.

Detectives are appealing for witnesses or anyone with information to come forward by calling either Lothian and Borders Police on 0131 311 3131 or Crimestoppers on 0800 555 111.