Genetic test could save Scottish wildcats from extinction

SCIENTISTS are hoping genetic testing could save one of Scotland’s most endangered animals from extinction.

The Scottish wildcat, of which less than 400 remain, has been given a lifeline by experts who hope a simple blood test could help preserve the species.

The genetic test, due to be launched at Christmas, will establish how many pure-bred wildcats remain, and take steps to protect them by introducing a breeding programme – the first of its kind. 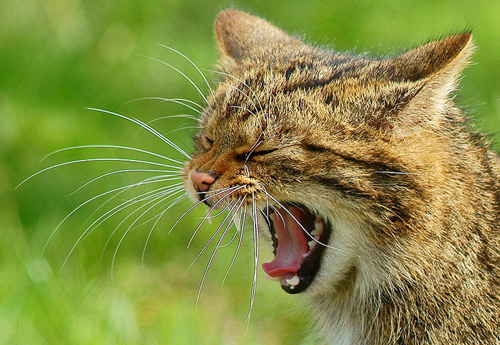 The Scottish wildcat is amongst the most endangered species on the planet and experts warn that if interbreeding continues, the species could be wiped out within five years.

He said: “There are barely words to describe how desperate their plight is. There used to be tens of thousands of wildcats roaming Scotland. The last attempt to establish the numbers in 2004 estimated it was only about 400.

“Many conservationists put the figure at 100 and some think there may already be none left.

“They are disappearing so fast they are more in peril than pandas, tigers or polar bears.”

The 100,000 feral cats that roam the Scottish Highlands are largely to blame for the decline.

They breed with the wildcats and produce hybrids that are part domestic cat and part wild cat.

Mr Piper said: “These are different from wildcats, which have always been solitary, not taking birds and the likes and existing only on rabbits.

“The hybrids are seen as more of a pest and are targeted as such.”

A mixed breed will have a thicker coat and be bigger than a domestic cat.

Some can be easily identified, with others the extent of the breeding is such that its impossible to know if the creature is pure wildcat.

The genetic test will take blood samples and allow the true remaining wildcats to be identified, with steps taken to protect them.

Dr Paul O’Donoghue of Chester University, who is developing the test in partnership with the Royal Zoological Society of Scotland WildGenes Lab in Edinburgh, described the work so far as “incredibly encouraging”.

He said: “Initial results suggest a diagnostic wildcat test will be available.”

Mr Piper added: “Even some of the wildcats in captivity may be hybrids, no body knows.

“This test will allow Scottish wildcats in captivity to be identified, brought together from wherever they are in the UK and a breeding programme started.

“This is absolutely critical to the creature’s survival. Communities, even gamekeepers, are right behind supporting wildcats.

“If we can successfully breed them in captivity then we can start to address the problems in the wild.

“Everyone who seems them loves them but if we don’t act now then the Scottish wildcats could be gone in as little as a year.”

If enough true wildcats were discovered to breed from, Mr Piper would favour the creation of a “mainland island” for the cats on a peninsula like Ardnamurchan. A spokesman for SNH said efforts to protect the wildcat had to be made in a co-ordinated fashion.

Douglas Richardson, of the Highland Wildlife Park, said: “We have this iconic emblem of the Highlands, and if we don’t get our finger out it will become extinct, guaranteed.”

“Grumpy Cat” could be a protected species