A SCOTTISH man has clinched gold for the UK this year- by thumb wrestling.

The winner, Graeme Cunningham, took the top spot at this year’s World Thumb Wrestling Championships at the weekend.

The 32-year-old from Edinburgh battled through fierce competition as
29 other thumb wrestlers from around the world attended. 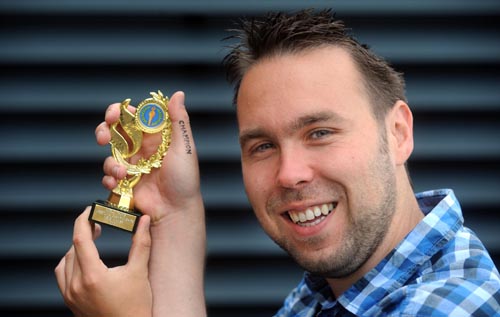 The competition was held at a pub in Lowestoft in Suffolk.

The champion revealed his secret to winning is to close his eyes while competing so he relies on his sense of movement rather than his sight.

Last year Graeme came second at the championships making this year’s victory all the sweeter.

He said: “I didn’t care about the 600-mile round journey, I had unfinished business from last year and had been putting in the practise ready to go one step further this year.

“I am so pleased that I managed to do that. There were some strong competitors, including the celebrities, but just goes to show if you put the work in and believe in yourself, you can achieve your goals.”

The electronics engineer added: “Let’s get thumb wrestling in to 2016 Olympics. I’m glad to go one further than Andy Murray did at Wimbledon and grab a title to bring back home to Scotland.”

The competition was filmed for Channel 5’s programme called Rory and
Will: Great British Champions.

Graeme, also the Scottish rowing team manager, said: “When I went on holiday when I was younger, I would sit in the back seat of the car with my sister Linsey and we would pass the time by thumb wrestling, so I’ve definitely got her to thank for getting me where I am today.”

The championships involve competitors linking hands inside a small wrestling ring and attempting to pin each other’s thumbs down for at least three seconds.

People from Australia, Poland and Pakistan as well as the UK all came to compete at the annual event which attracted over 100 spectators.

Many of the people wore dressings and decorations on their thumbs for the special occasion.

Thumb and Coke, Thumb-erlicious, Thumberdolt and ThumbDown were some of the stage names used.

Rory Van Bellies, ring master and CEO of the World Thumb Wrestling Championships, said: “Graeme bounced back from last year’s excruciatingly close final defeat at the thumb of ‘The Cobra’ from London.

“He was certainly a crowd favourite, with the audience falling in love with his style of keeping his eyes closed during bouts.

“The people of Lowestoft cannot wait to see him back next year to defend his title and to take on 2011 champion The Cobra, who could not make it this year due to an injury.”

Plans to defend his title have already been made by Graeme. His prized trophy currently takes a place of pride on his desk at work.

He added: “I actually did suck my thumb as a child while stroking a little silk label- that was my comforter- so maybe that’s where it all started.”