A 19-MONTH-old girl who cheated death in a hit and run accident cannot sleep through the night without screaming “Car! Car!”, her dad has revealed.

Glynn Mighton, 40, and Sharon Brown, 41, had just left home in Edinburgh to visit a sick relative  when a silver Vauxhall Astra slammed into their car at high speed.

Dad Glynn’s head was smashed through the driver-side window in the accident, which happened on Saturday afternoon in Carlops Avenue. 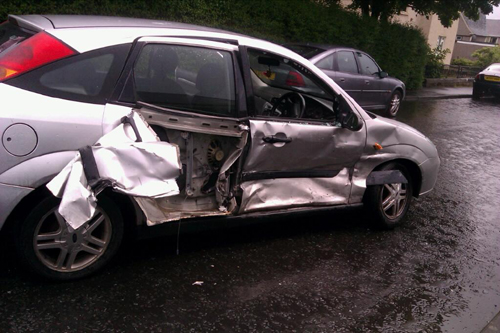 Police are hunting two men in connection with the crash, and are appealing for any witnesses to come forward.

Toddler Isla Mighton had been sitting in a car seat in the back of the family Ford Focus and was protected by the car’s central pillar which absorbed the brunt of the impact.

Glynn recalled the accident and said he even managed to get a glimpse of the “mindless” culprits fleeing from the scene.

He said: “We were on the way to visit my gran who’s in hospital in Hawick.

“I was just passing a junction when this car rammed into us on the right side of my car.

“It struck us head-on between the front wheel-arch and the central column. My daughter was crying and screaming.

“I saw the two guys running away – they didn’t stop to see what happened.

Mr Mighton who worked as a delivery driver before the crash has now been forced to work on a temporary basis in his company’s warehouse.

Glynn said it is “agonising” to hear is daughter, who has only just learned to speak, be so distraught despite escaping the incident with no injuries.

He added: “We were definitely lucky. If the car had struck the passenger side where my daughter was sitting I don’t think she would have made it out.

“It was also lucky that no glass went in and hurt her. There was a few shattered pieces that flew from the drivers window and landed next to Isla.

“She’s just started speaking and the last few nights she has been waking up screaming ‘Car! Car!’. It’s agonising.

“She was also sick on Sunday, the day after the accident AND Sharon’s birthday, and I think she’s just suffering from serious shock.”

Lothian and Borders Police are now hunting two men, described as slim and around 20-years-old, in connection with the silver Astra.

They may have fled along the city’s Carlops Avenue.

A police spokesman said: “While the driver of the Ford Focus was not left badly injured, he was left shaken as a result of the mindless actions of these two individuals – particularly as his partner and 19-month-old daughter were passengers.

“We are appealing to anyone who was in or around Carlops Avenue around midday on Saturday who witnessed the collision.”