A TRUCK driver was left red-faced after his vehicle got trapped under a city centre railway bridge this afternoon.

Fire and police officers were called to the scene after the 7.5 tonne lorry got trapped, closing off a busy road in Edinburgh for an hour-and-a-half. 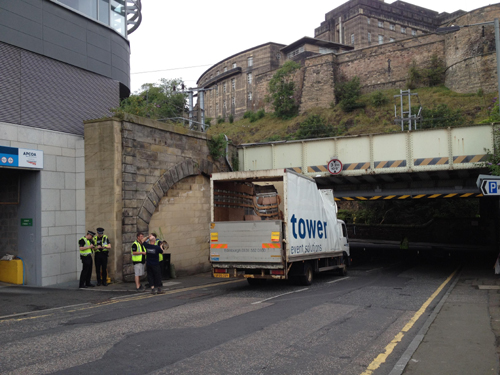 Nobody was hurt in the incident, which happened just after 11am this morning at New Street, Cannongate.

One onlooker, Katie Melville, 26, said the front of the truck had been ruined by the accident.

She said: “I was driving up the Cannongate and traffic was diverted because of the lorry that was jammed under the bridge.

“I could see that the front of the lorry had been crushed.

“There were employees hanging about and they were loading boxes from the van into a smaller lorry. One of the men was talking to police officers.”

A spokeswoman from Lothian and Borders police said: “We received the call at 11.21am that a 7.5 tonne lorry had become trapped. We asked the fire service to assist.

“Carlton Road was closed from East Market Street for around an hour and a half. No one was injured.”

A manager at Tower Event Solutions, who did not wish to be named, confirmed that the company had been involved in the incident.

He added: “It was an accident and I’m led to believe that nobody was injured.”