SUPERMARKETS have been accused of breaking alcohol legislation and using the Olympics as an excuse to cash in “pocket-money” booze, according to critics.

Despite a ban on cheap drink stores such as Tesco have been promoting half-price offers on booze so that the public can “share the glory and the triumph” of the nations athletes.

Critics have said that London 2012 should be used to promote healthy living not to give superstores a way of selling drink in an “irresponsible” fashion. 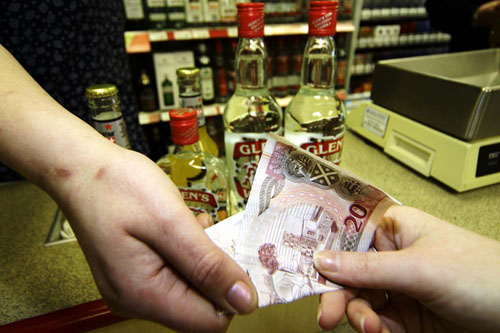 Dr Evelyn Gillian, chief executive of Alcohol Focus Scotland, said: “Olympic athletes didn’t get where they are today by drinking cheap alcohol, yet armchair fans are encouraged to stock up on cheap booze.

“It is inappropriate and irresponsible to associate alcohol with sporting success through promotions and sponsorship.

Since October last year it has been illegal in Scotland to offer multi-buy deals on wines, beers and spirits, believed to encourage people to buy more alcohol.

This means that buy one, get one free offers or others such as three bottles of wine for £10 are banned.

But shopping giants are able to worm their way around government rules by slashing the price-tags of individual bottles.

Dr Gillian added: “It is typical of the big supermarkets getting round legislation banning multi-buy promotions by heavily discounting individual bottles.”

A Scottish Government spokeswoman said: “We hope the Olympic Games will inspire people to lead healthy and more active lifestyles.

“We would urge retailers to act responsibly and not sell alcohol for pocket-money prices.

“The Alcohol (Scotland) Act 2010 has helped by banning quantity discounts. However without minimum pricing this would not be fully effective and that’s why we’re introducing a minimum price for alcohol at 50p per unit.”

Tesco stand by their advertisements and use of promotions.

A spokesman said: “We take our commitment to selling alcohol responsibly very seriously and always comply with licensing laws.”