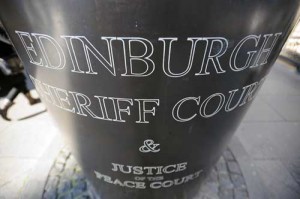 A THUG has admitted biting off a man’s ear and swallowing it during a bar brawl.

Alastair Park chewed the man’s ear off during a fight in a pub in Tranent, East Lothian.

The pair started brawling after the victim walked into the pub following an Old Firm match and challenged patrons to a fight, calling them “fenian bastards”.

Edinburgh sheriff court today heard the victim was rushed to hospital with part of his right ear missing and the cartilage exposed.

Sheriff Elizabeth Jarvie described the case as “a most unsavoury crime”.

The attack happened on 29 April this year, when the victim Graeme Aitken, described in court as a “well known local thug”, walked into Whispers bar, from which he had been barred for 16 years.

Park, a plasterer, admitted assaulting Graeme Aitken by punching him on the head, biting off a section of his ear and swallowing it.

“There had been a football match on the TV during the course of that day.

“The complainer entered the premises and as he did so tried to goad persons within and challenge them to a fight. He walked around the pub and dancefloor doing the same.

“The accused became involved with the complainer and a fight started.

“The accused got the better of the complainer but continued to punch him on the head.”

The fiscal depute continued: “The two went into a seated area of the bar and in the course of the struggle there he bit off a section of the complainer’s ear.

“The two parties were separated. The complainer pushed out the front doorwhere he became involved in a further fight.”

Mr Kirk added: “CCTV then shows the accused swallowing an item, which was a part of the complainer’s ear which he had bitten off.”

Police had been told a fight was going on and attended the scene, the fiscal depute said.

Mr Aitken was taken to Edinburgh Royal Infirmary where medics saw he had “an obvious bite to his ear with tissue loss”, Mr Kirk said.

Park’s defence agent Mark Hutchison said he had been drinking in the pub, where his girlfriend worked, for most of the day.

He said: “[Park] hadn’t been watching the football, as I understand it a Celtic and Ranger game had been on.

“The complainer is a well known thug in the area.

“He’s banned from Whispers. The owner says he has been barred for 16 years.

“He left with the intent of looking for trouble.

“He went into the pub and wanted to fight with them, calling them fenian bastards.”

Mr Hutchison said drink influenced his client’s actions, and there was only female bar staff at the pub at the time.

The defence agent continued: “He went forward and got involved in this struggle with Aitken.

“In the course of the struggle the ear presented itself and he bit the ear preventing further damage to himself.”

“Clearly he didn’t cover himself in glory.”

Mr Hutchison said Aitken also smashed windows in the pub, and threatened to kill another man who intervened and rape his wife.

Sheriff Jarvie said: “This is a most unsavoury crime if you don’t mind me saying so.”

The charge read that the attack was “to “[Mr Aitken’s] severe injury and permanent disfigurement”.

Park, who has been in custody since May, showed no emotion as he was led from court.