A TEENAGER died on a family holiday after slipping while taking his pet dog for a walk.

Tragic Phillip Collins slipped as he climbed over a fence and hit his head on the ground.

The alarm was raised by cocker spaniel Rover, who stayed at Phillip’s side barking until catching the attention of a passerby. 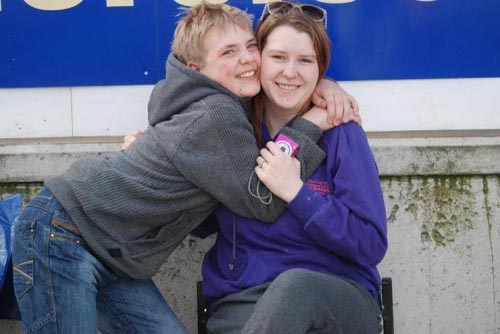 Despite the efforts of ambulance crews who rushed to help, the 14-year-old was declared dead at the scene.

Phillip, 14, from Falkirk, had been on holiday with his family at Scone Caravan site, which is next to the Perth Racecourse.

His parents, Marie Love and Allan Collins, are said to be “absolutely devastated” by the tragic accident, with family, including Phillip’s sisters Alanah (19), Cara (8), and Hayleigh (7), all trying to come to terms with their loss.

Mr McDonald, said: “It is horrible and Marie is in another world just now – she is absolutely devastated.

“The family were having their tea when Phillip was out walking the Rover, a blue roan cocker spaniel.

“He went over one of the fences at Perth Racecourse, which is beside the caravan site, and I understand he was still holding onto the lead when the fatal accident occurred.

“He had climbed over a fence, slipped and hit his head. Phillip was found by a passer-by shortly after his death because Rover was barking.”

Mr McDonald said the autistic teenager had a “great relationship” with his pet pooch Rover, and “showed a lot of care.”

“You couldn’t help liking him. He was like a wee boy was a tonic. He didn’t like a lot of noise but he loved happy songs – ones that were cheery and bouncy.

“The family had gone up to the caravan site on the Monday and had it booked until the Sunday, with Marie arranging it all – it’s a real tragedy.”

He continued: “There were a lot of people at the caravan site who offered to help after Phillip was found. We live in strange times but when the chips are down it shows that there is still a lot of kindness in the world.”

Maria had set up the charity Falkirk Autistic Bairns to work with and support children with autism.

“We are all absolutely devastated at this tragic accident and have huge sympathy for Phillip’s family,” he said.

A police spokesperson said: “Tayside Police can confirm they attended the sudden death of a 14-year-old boy at 4.20pm on Friday August 3, near to a campsite in Scone.

“There are no suspicious circumstances and, as with all sudden deaths, a report has been submitted to the procurator fiscal.

A spokesperson for the Scottish Ambulance Service said: “The boy had been seen playing on the racecourse shortly before this fatality.

“When we arrived, three doctors were there along with the police but Phillip was declared deceased at the scene.”