AN OAP had to be rescued from the waters of the River Esk after she fell in trying to save her daughter’s pet dog.

The elderly woman had been walking two-year-old Cocker Spaniel Ollie when the dog slid down a steep bank into the water. 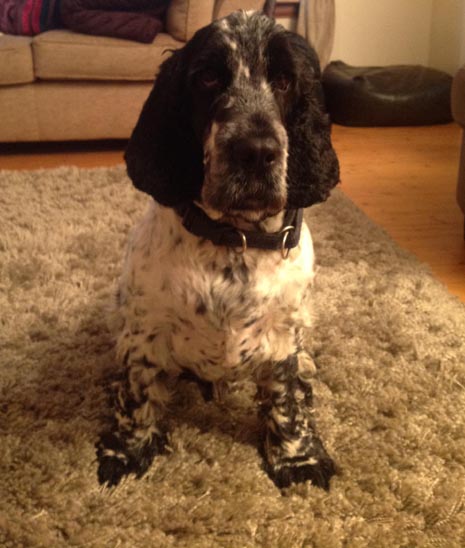 Mrs Milne tried to lower herself down to reach the dog, who had become trapped in a thatch of Ivy.

But when a branch she was clinging on to snapped, the OAP was left waist-deep in river water.

After managing to scramble onto a nearby rock she was stranded for over an hour before fire fighters managed to pull Anne and dog Ollie to safety.

Mrs Milne had been walking Ollie, her daughter’s dog, along with her collie / Rottweiller cross Pico at 11.30am on Sunday at the ‘Grove’ woodland walk, near Wedderburn Terrace in Iveresk.

She said: “Ollie was in high spirits and running about, then I realised I couldn’t see him and I could hear him whining,” Anne a retired council worker, said.

“He’d run down a steep bank and slid right off into the water and when I found him he was caught in a thatch of ivy.

“I held on to some thick tree branches to lower myself down to him and then one of them broke and I landed in the water. The water level was just over my waist and I was standing on a very wobbly rock.

“The embankment was too high for me to climb back up. I couldn’t even push Ollie up there once I’d managed to get him out of the ivy.

“I wasn’t too worried because the current wasn’t strong at all. My biggest worry was that Ollie kept struggling and wriggling in my arms so if I’d lost my grip on him he would have been away.

“My friend and her daughter were with me and they stood with Pico, who’s 13 and wasn’t that bothered by what was going on.”

She said: “They had a ladder but it was too short so they had to get an extension. They lifted Ollie up first then put a life-jacket on me and wrapped a rope around my waste in case the rock gave way. Once the extension was ready I climbed up the ladder.

“They did ask me if I wanted to go to hospital but I said no because I wasn’t injured. Then the fire fighters pointed out that I was shaking quite badly, so I must have been in shock.”

Police officers wrapped Anne in a blanket and drive her and Ollie home.

“The police officers and fire service were wonderful, I cant thank them enough,” said Anne.

A spokeswoman from Lothian and Borders Fire Brigade said: “We used water rescue lines, harness and a short extension ladder to rescue the woman. She was not injured but was checked over by ambulance staff.